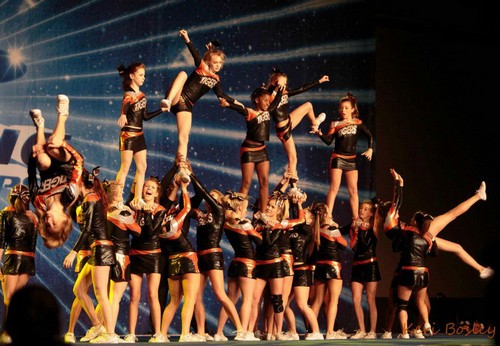 Tonight on TLC CHEER PERFECTION returns with the second season premiere called, “With Success, Comes Pressure…”  The series follows a group of young cheerleaders at Cheer Time Revolution, located in Sherwood, Arkansas, as they endure the world of competitive cheerleading.

The series captures the talent, drama, and rivalries that emerge as the young competitors — and their moms — do everything it takes to reach cheer perfection.

On tonight’s show Now that Youth Silver has a bid to US Finals, Head coach Alisha pushes them to compete in more difficult events. Alisha’s upset when she hears negative feedback about her daughters. Sparks flare when Team Mom President Andrea appoints Chris Crump as VP.

We will be live blogging the season 2 premiere of Cheer Perfection . . . so make sure to come back to this spot and watch the show with us. Make sure to refresh often so you get the most current info! While you wait for the episode let us know how excited you are for the new season of Cheer Perfection.

The show begins with practice at Cheer Revolution. Alisha is giving her daughter Cambree instructions but her daughter is giving her a little attitude. She is not into listening to her mom. After that Alisha tells her team that she is redoing their return to make it have the highest level of difficulty possible for the upcoming competition in Texas.

It is time to learn the new routine. The parents watch as the new routine is taught to the kids. Ann, Torann’s mom, tries to give her daughter direction but gets the eye-roll. Other mom’s there include Mandy, Olivia’s mom, Michelle who is Ashtyn’s mom, Shannon, Brooke’s mom, Andrea who is Kylie’s mom and also team mom president.

The new routine is complicated and there is a lot for the girls to learn in a short time. Michelle tells Ashtyn her practice was terrible. Torrann is not giving it her all due to a hurt foot. She doesn’t want to make it worse. Alisha takes Andrea aside to talk to her about upcoming parents meeting. Andrea wants to talk about a new Vice President in the parents meeting. Alisha is thrilled Amanda is president. Shannon and Ann are trying to rekindle their friendship. Shannon wants to be team mom president.

It is the night of the mom meeting, which is being held at a library because Andrea hopes that will keep the mom’s from yelling and fighting. Andrea starts the meeting by announcing their will be changes and improvements. First off she starts with letting them know that if a team mom is not cutting is she can out them. Shannon is concerned Andrea will cut Ann as team mom. Andrea brings out a gavel to stop the women from talking. Next up Andrea says she needs a treasurer, Shannon is nominated and accepts. Andrea then announces that Chris, Abby’s dad will be her new vice president. It is not a big surprise because the two are pals. Some of the members are not please that they did not get to vote about it. Michelle makes it clear is she not going to listen to a man, the only man she listens to his her husband.

At the gym the next day there are only 4 days tell the competition. They have to do the routine two days in a row at the competition. Cambree will not tie her shows and that holds up practice. She throws a fit and it causes the team moms to talk about the issues with Alisha’s children Cassadee and Cambree and their behavior at practice.

Ann continues to worry about Torrann who is not speedy enough at her tumbling routine. Alisha threatens to replace Torrann in her tumbling section of the routine if she does not get it together. During practice Michelle comes in late is forced to sit next to Chris because it is the only seat open. Ann and Chris talk about how his new positions will give him a chance to have his voice heard. Michelle tells him good luck with that.

Alisha talks to the girls about how good the competition is in Texas. 3 days before the competition the routine is still off. Mandy is annoying Ann as she talks about each girl during the routine and the mistakes being made. When Torrann comes off the mat and says her foot hurts Ann gets upset that Mandy hears it. Later Ann talks to Alisha about her kids causing problems and despite other moms agreeing with her they all throw Ann under the bus. In the end Alisha tells them she will pull her kids out of the competition.

After the big fight Ann decides she will take Torrann out despite Andrea and Chris telling her not too. When Ann leaves the other moms talk about how stupid the momma drama is. Mandy, Andrea and Chris hope it will work out. In private Alisha and RD talk about what happened. Alisha doesn’t think it is fair to the kids, her momma tiger came out instead of coach. RD tells her to not pull the girls out and tells her to go coach. Ann feels bad and takes Alisha into the office. Ann starts to cry as the two are talking. Alisha is still pissed as Ann tries to explain herself and even points out that Torrann too is having problems. Alisha tells her that her feelings were hurt but she is now over it. They hug it out and all girls are back in the competition.

Two days after the blowout the team heads to Huntsville, TX for the competition. Youth Silver is ready but Alisha is still nervous as she checks out the other teams who are competing. There is some stiff competition for sure. The team mom’s too check out the competition and one team Cheer Factory makes them very nervous. Before Youth Silver heads out Alisha gives them a good pep talk telling them to be sassy and have lots of personality. She gets worried as the girls head to the floor. Andrea feels like she is going to vomit as the girls get ready to perform. Ann thinks Torrann looks nervous as walks onto the floor.

Youth Silver does an amazing job and Alisha is very pleased with them. She said timing was a little off but considering they have only known it a week it was good. However that does not stop her from criticizing the routine. Olivia made a mistake and is upset that she is the only deduction that team had. She did not stay up in the stunt. Mandy consoles her daughter as she is crying.

Later the group goes out dinner and learns that Youth Silver is in first place. Cheer Factory is barely behind the team which means that the girls need to bring it. Youth Silver needs to get their timing together because if Cheer Factory brings it then Youth Silver could be knocked to second place if there is even one mistake.

Day two of competition comes and Alisha is riding the girls but Cambree has an attitude. She starts to cry as her teammates tell her to basically get it together. Even RD and Alisha step and up and tell their daughter to straighten out or get off the floor the girls are there to win. Finally it is time for Youth Silver to do their routine. All the moms are super nervous as the girls take the floor. Their performance is awesome and all the moms as well as Alisha are very proud. They made leaps and bounds from day one, according to Alisha. Cheer Factory, who is in second place, is up next. The girls and moms watch as Cheer Factory performs a great routine as well. It is going to be a close call and everyone nervously waits for the awards. In the end Youth Silver is named as the 1st place winners.