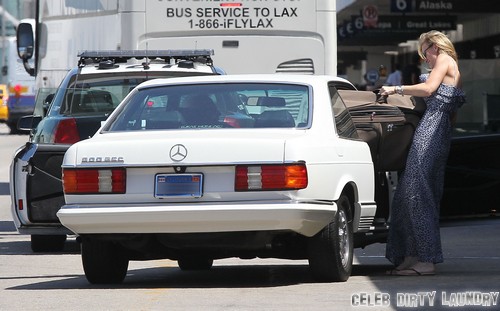 Boy, the difference that just a few days can make! Late last week we were telling you about Clint Eastwood’s official split from Dina Ruiz, his wife of 17 years. The couple has had a rough couple of years that seemed to begin when Dina believed she had the klout to become the next Kris Jenner. She pimped a reality show that ended up having a blink-and-you-missed it run on E! Dina thought that being married to a famous man, juggling kids and managing a boy band was enough to sky rocket herself to fame. Instead she alienated her husband and no one watched her show. A-list actor Clint resented his privacy being invaded and avoided his own home.

The couple has been apart for about 18 months and in that time Dina has spent time in some sort of rehab and then paraded her high school boyfriend around for the world to see. After posting videos of them together on line it looked like Clint was going to have a slam dunk divorce case with documented infidelity which could save him millions. And then Clint stepped out with a blonde named Erica Tomlinson Fisher who was confirmed by E! to have spent the night with Clint before he dropped her off at LAX to catch a flight to somewhere.

So, just as we were ready to paint Dina as the bad guy in this divorce, it instead looks like they are both getting their love tanks refueled elsewhere. Clint is 83-years old and I have to wonder why any considerably younger woman would want to spend a night with him. Oh that’s right- he’s loaded.

What do you guys think, is this marriage a wrap? Tell us your thoughts in the comments below!