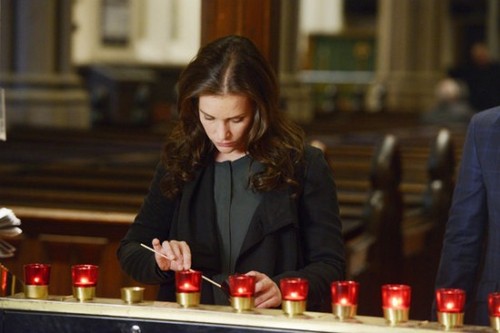 COVERT AFFAIRS continues tonight on the USA Network with a new episode called, “No.13 Baby.” On tonight’s episode An old flame reveals she still holds a torch for Auggie. Did you watch last week’s episode? We have a full and detailed recap here for your enjoyment.

On last week’s show despite his misgivings, Auggie decided to work with Calder on an alternate method to destroy Henry. Joan confronted Auggie about this alliance.

On tonight’s show Henry reaches out to his only ally within Langley – Calder. Joan reveals something during her deposition that puts a wedge between herself and Arthur. An old flame reveals she still holds a torch for Auggie.

The first thing Helen does after witnessing Annie alive and walking is to go running to Auggie. She comforted him by telling him the little she saw of Annie- Annie appeared fine. She wasn’t mad but she did tell Auggie that it doesn’t change how she feels nor the proposition she offered him no long ago. He’s won’t go into that with her when he made himself pretty clear the last time.

Henry is getting desperate about this Jessica Matthews that has been causing him troubles in Europe. Out of all the people he could turn to, he went with Calder. He has no choice now. His only other “ally” he thinks turned on him thanks to Calder and Auggie. What did Henry want? He wants Calder to track down and dispose of Jessica.

It’s easier than Henry thinks it is. Annie set up a meeting with him at a church. He doesn’t like that she was so willing to expose the both of them. Especially when she doesn’t have anything concrete against Henry yet. All that she has is a flash drive she took off of Derek, the man she killed in Geneva. He dives it later to Auggie and when asked he tried to say Annie sent it from Geneva. Auggie knows he’s lying and that’s why he asked Helen to follow Calder. He wants to see Annie and he’s trading on Helen’s feelings in order to get her cooperation.

Helen may not be that cooperative she wants back in an Langley. No more hiding or pretending to be dead. Joan had told her now is not the time but Helen wants her life back. At this point anything close to resembling a life will do.

Derek was a deep undercover C.I.A operative. When Annie was pretending to be him and angering Henry; Henry had threaten someone named Violet. Annie found out that Violet was Derek’s daughter. She went to go see her and after a slight scuffle made it clear she wasn’t there to hurt her. Violet was given a location to hide if anything were to happen to her dad. Annie is betting he kept a lot of information there and guarantees she wouldn’t hurt Violet if she gave up the location.

Calder made the person following him. Will he suspect Henry?

Calder still meets with Annie. She needs his help getting into cabin Derek had hidden. It’s too guarded for her to do it alone but Calder is focused on why Annie is still in the states taking risks. He tells her about be followed. He did think it was Henry until Annie corrected him. She knew it was Auggie. It even makes her emotional. She wants to see him and yet Calder makes her stick to their earlier agreement. In the meantime he’ll handle Auggie. He told the poor guy the truth. Annie was the open that didn’t want to see him.

The closest he came to Annie was being in her presence while she didn’t speak to him. Feeling vulnerable Auggie went to Helen’s. He needed that intimacy.

Someone who doesn’t want any loving is Arthur. Both him and Joan were called to give depositions in his trial. He wanted her to give complete honesty yet he didn’t like what he heard. He didn’t know before that Joan had condoned the torture of Teo a couple of months ago. Now he does and he can’t look at Joan the same.

By the next morning, Auggie regrets his actions. He knows he shouldn’t have taken advantage of Helen. She tells him she understands. She knows he’s in love with someone else.

Calder did assemble a team to enter the cabin only for it to blow up as they were entering. Henry is furious when he finds out . He calls in Calder and demands to know why he was his cabin. Calder said he had tracked Jessica to the location. He was unable to capture her because she made a run for it. Henry huffs and puffs but he lets his wishes known. He wants Jessica dead.

Annie has to drop the Jessica persona. It’s getting too difficult to maintain. She was thinking about who she should become next when she runs into Helen. Helen doesn’t want to hurt her or what she’s trying to do but she warns Annie that it better not take long. Auggie won’t wait forever.

Henry found Annie on the security cameras. He never saw her face but he did see her motorcycle. He tracks the motorcycle down to the station. He’s just about to catch Annie when Helen stops him. She pretends to be Jessica. She wanted to scare him when he shot and killed her. Leaving the scene he told his cohorts to shut everything down.

Annie saw what he did. She couldn’t after that. She had to go to Auggie’s.