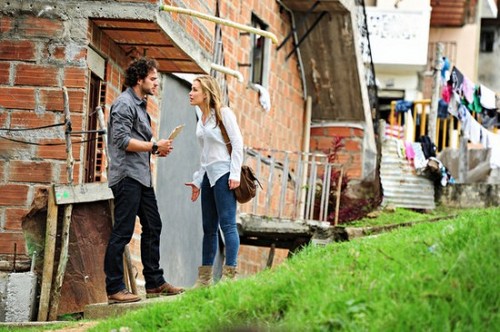 COVERT AFFAIRS continues tonight on the USA Network with a new episode called, “Into the White.”  On tonight’s episode Joan begins a round of interviews that could significantly alter her career trajectory within the CIA.  Did you watch last week’s episode?  We have a full and detailed review here for your enjoyment.

On last week’s show after a bombshell revelation rocks the CIA, Annie and Auggie combine forces with Arthur in an attempt to bring Henry’s hidden agenda to light. Joan finds a personal moment to confide in Annie.

On tonight’s show Annie returns to Colombia and must determine Teo Braga’s true allegiances in order to thwart a potential act of terrorism. Joan begins a round of interviews that could significantly alter her career trajectory within the CIA.

The show begins with Annie talking to Arthur about Teo. She questions if Joan knows and if the two of them can work together on actionable intel. Joan shows up and Annie tells them that Teo may be involved in an bomb threat in a bomb threat against an American target in Columbia Arthur calls it a lie but Joan wants to move on the intel because it is a bomb threat. Arthur reveals Teo is an undercover operative inside ALC. Annie is upset Arthur didn’t tell her. Turns out Teo’s mom died from an ALC mom, he always wanted revenge. Teo joined ALC and became a double inside ALC. Teo eliminated one of his rivals and proved himself. Now he is off the radar. Annie thinks he has gone rogue Arthur thinks her is deep in cover and working the mission. The plan is to treat Teo as an operative but Annie only has two days.

Annie packs to leave and talks to Auggie, he wants to know if she talked to Joan about Seth. She didn’t. He says he will do it. Auggie thinks Arthur is asking her for too much. He doesn’t think Arthur is thinking clearly because Teo is his son. Auggie give her a gift to help her in Columbia.

In Medlin Columbia Annie heads to find Teo. She meets a woman and tells the woman she a gift for their friend. The woman asks that he couldn’t deliver it himself and Annie replies he will pay it later. The woman puts a flower in a wrapped package and gives it to a messenger boy who takes it door and leaves it outside. The box knocks and someone takes the flower from the package, which just so happens to contain a thread to track Teo.

Back in D.C. Joan is being questioned by the Senate committee about Jay Wilcox death and a woman operative involved in the death as part of her bid for the DCS job. The female senator questions Joan about Arthur’s affair and basically discredits Joan as a candidate. In the hallway she runs into Eric who is also up for the job. Auggie is waiting for her when she leaves. The two talk about Seth and replays his attack on Annie. Joan asks about he attack and who is going to clean up the scene. Auggie reveals it hasn’t been taken care of and Joan offers to take care of it.

In Columbia Annie finds Teo thanks to the thread. He tells her to leave him alone. He won’t give her a minute and throws the intel in her face. She calls Auggie and reveals she couldn’t get the GPS on him. She tells Auggie that Teo won’t speak to her and they need to treat him like a terrorist. Annie calls in a code and asks to be connected to Yellowstone.

Joan heads to Seth’s to clean up the scene, where she discovers it is in shambles. She fixes the place up and wipes clean all the evidence. Joan also after many attempts unlocks the safe and takes out a gun and some files.

Aggue tries to find Teo’s location and contacts Annie to tell her that he is most likely with a lot of other people and it is too risky for her to go in. She insists on going in anyway but she will go in with the local Sherriff, who is not thrilled that she is there. Turns out the Sherriff is Calder Michaels and Annie knows him. Once she explains why she is there and that she was able to get a thread on Teo he is willing to run the raid. Annie only wants Teo, so he finally agrees.

Auggie heads to Aruthur to tell him Annie is about to walk into an ACL strong hold. The two have words about how Arthur and Auggie are handing the situation and arguing about Annie’s actions. Auggie accuses Arthur of praying on Annie.

The raid in Columbia is on. Michaels leads the charge as the two arguing the whole time about protocol and her integrity. Annie has to remind him they are on the same team. Teo and his ACL pals are in a compound like place that is stormed by the local police including Annie. Gunfire breaks out and it becomes a dangerous situation as they find bomb materials.

Calder finds Teo first and takes him for questioning despite what he told Annie. Teo refuses to speak as Calder continues to interrogate and torture him As Calder asks questions about the bombs and targets Annie watches as Calder prepares to continue the torture. Annie finally convinces Calder to let her talk to Teo alone. She tells him she knows about his mission but Teo claims to not know what she is talking about and spits on her.

When her talk with Teo goes nowhere, she calls Joan and talks to her about the bomb also revealing that Teo was combative. Annie asks Joan about taking extraordinary measures. Joan tells her to keep with the mission and lets Annie know she knows about Seth. Joan gives Annie her support. As Annie looks at a file Teo who has managed to escape brushes past her knocking her down. Both Annie and Calder chase after Teo who manages to ditch them both.

Annie wants Calder to calm down so she can tell him her idea. She gets his attention when she reveals that she knows his target. She found a brochure for a hotel in Columbia that is being targeted with Soul Star executives hat are coming to stay there that day. After some probing she gets Calder to believe her. Calder puts a plan into action despite not trusting Annie.

Joan makes a statement to the Senate Committee regarding her candidacy for the job. While passing out information she gives Senator Pearson some incriminating evidence she found in Seth’s files but only to her. The info rocks the Senator and she removes herself from the process.

In Columbia Calder and crew with Annie in two head to halt the hotel from being bombed. Annie sneaks off on her own to try and find Teo, which she does at the top of the hotel with a sniper riffle. He admits to being an undercover operative. He tries to explain himself and how his actions have been calculated for his mission. She demands he put down his riffle. He refuses. Annie wants to know who he is trying to kill. Teo won’t give her info and she threatens to shoot him. He tells her she has to trust him.

A shot is fired and it turns out that Teo shot a high ACL operative. Annie tells him the CIA is hunting him and that the ACL is going global. She wants more information from Teo but he is reluctant until she gives him an untraceable phone. Annie tells him if his cover is to stay in tack he must take the phone and give her intel. He tells her that two Chinese nationals will be in D.C. and that is ACL next target.

Calder is all over Annie when she reappears. She tells him she didn’t find Teo and has no information. Annie leaves to get on a plane back to D.C.

Joan gets the DCS job. In Panama City Arthur meets with Annie who tells him that Teo got out on his own. She tells him Teo is going deeper and that he does still know truth north.