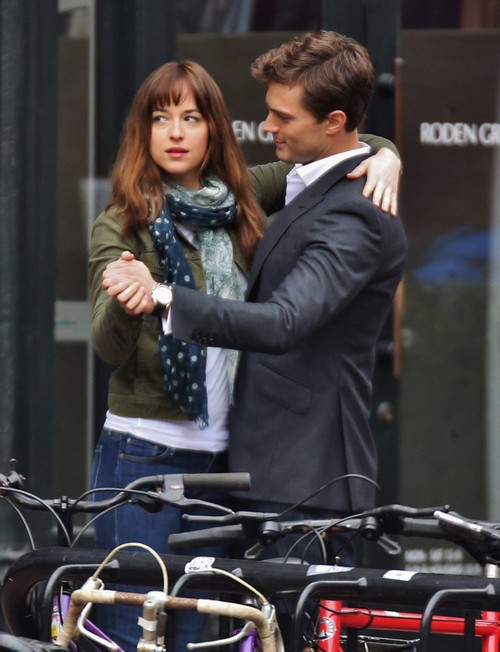 Nothing works more than the green eyed monster into turning fully functioning adults to suddenly becoming whiny little children. Dakota Johnson‘s boyfriend, Jordan Masterson, has reportedly become jealous of her role in the new Fifty Shades of Grey movie and there really is only one thing that needs to be clarified at this point. Is he truly jealous about the sex scenes or is it because she’s finally getting noticed.  After all she’s in the news all the time now while he makes is living on guest appearances. Not that there is anything wrong with that, but no one remembers him. Prior to looking him up, I assumed he was just the guy that held her purse.

Well, maybe he should have thought of that when she signed on. The role of Anastasia Steele has been speculated on for well over a year before Dakota got the part. And the sad thing for her is no one believed she deserved it. Not even we at CDL felt she was right for the role. She either looked too old (as a blonde) or too boring (as a brunette). However, lately, we’ve tried to hold back our judgment. Figured the final product would give the final proof if Dakota was at least a good actress. Then came Jordan.

How is anyone expected to succeed when they aren’t getting any support at home. He should shut up and be there for her or leave. No one is forcing him to face his inadequacies. If he can’t handle a woman going further in her career than he then the relationship wasn’t meant to be. Too bad because she can surely find someone else willing to be a partner instead of a jerk!

Photo Credit: FameFlynet and You Tube