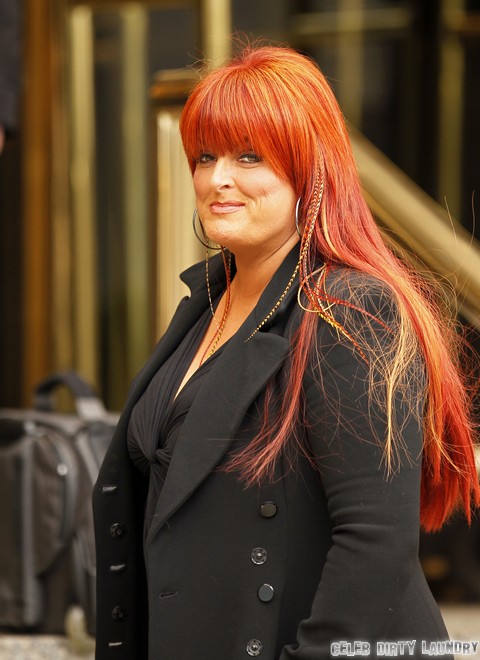 Wynonna Judd has always had a huge weight problem. Over the years she has talked pretty candidly about being an emotional eater and rather than dealing with the pain in her life she has chosen to turn to food for comfort. She has blamed her weight on never meeting her biological dad, Charles Jordan and she has also blamed it on having a (usually) hot sister like Ashley Judd to make her constantly feel like an ugly duckling. Wynonna has explained it away time and again but has rarely chosen to get herself together, let alone keep herself that way.

The Nashville megastar has signed on to do this season of Dancing with the Stars and rather than it generating good press, there is an epic amount of concern for her overall health. According to the March 18th print edition of GLOBE, Wynonna is not fast tracking towards a healthy weight loss with the rigorous dance training. Instead she is putting herself and her health at serious risk. The 245 pound singer’s “hips, knees and ankles will be suffering severe punishment from all of that extra weight and she runs a high risk of permanent disability.” says weight loss expert Dr. John McDougall of the stars’ new television gig.

McDougall believes that Wynonna should have begun training for the show a long time ago and in order to safely compete she should have dropped 40 pounds before her signing on to dance was even announced.  Wynonna herself swore that she would never find herself competing for the good ole’ mirror ball trophy. Supposedly it was gut level fear that she won’t be around to see her kids grow into adulthood is what lit a fire under her. Will you be watching Wynonna on DWTS? Do you think she’ll stay in the competition for a while or be cut quickly? Tell us your thoughts in the comments below!