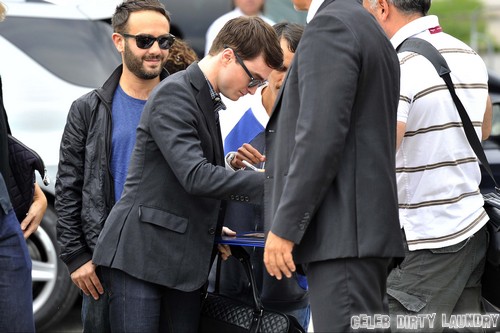 Harry Potter fans are never the most gentle of the lot, and they proved their passion and excitement for Daniel Radcliffe when they turned over the barricades in a stampede to get to him at the Venice Film Festival.

Radcliffe was attending the red carpet for his new film Kill Your Darlings, co-starring Elizabeth Olsen and Dane DeHaan, when the fans managed to get past the barricade and rush him before he could reach the red carpet. However, security responded very quickly, and the fans were quickly sent back to their place.

Any normal person would have reacted to this incident in terror and fright, but as Daniel says, he’s been used to this kind of attention since he was eleven years old. He explained at the press conference for Kill Your Darlings, “Thankfully, it’s not always like this. I’ve been dealing with it in various ways since I was 11. I don’t take it seriously, actually I think it’s funny.” He also thanks his fans for supporting his films, adding, “I’m incredibly grateful for the swirl of support behind me. My fans seem to be excited by the unconventional path I am taking.”

And he certainly is taking a very unconventional path. There are no superhero flicks on his resume or blockbuster franchises. Instead, he hasn’t shied away from Indie or weird, and he has films like The F Word and Horns coming up, including Kill Your Darlings. None of them seem like they will be ‘mainstream’, but these days, that’s almost a good thing. ‘Mainstream films’ have become a gigantic blur of mediocrity and stupidity, and Dan’s clearly making sure that he flexes his acting abilities with a wide array of different genres and films.

What do you guys think about Daniel Radcliffe getting stampeded at Venice? Let us know your thoughts in the comments.