Demi Moore Back On Booze And Drugs: Kiefer Sutherland A Bad Influence? 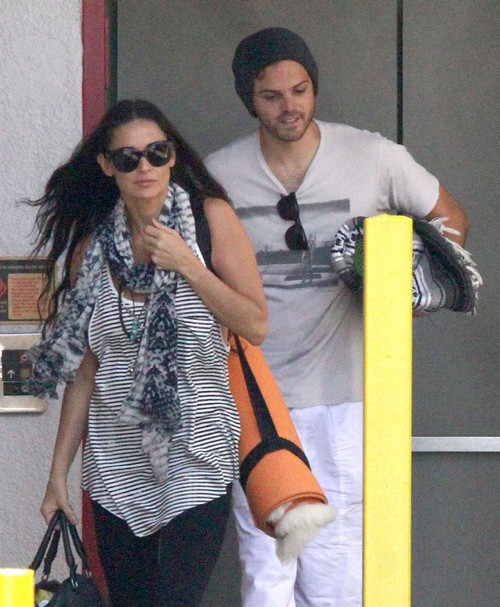 Demi Moore has stayed away from the spotlight while she recovered from her downward spiral after her split with Ashton Kutcher, but is she getting negatively influenced by new co-star Kiefer Sutherland?

Kiefer and Demi are currently filming Redemption in Calgary and they hit the night out for a few drinks. Apparently, eyewitnesses add that Kiefer got belligerent drunk, explaining, “He was stumbling, he took his shirt off, he was dancing. It was a funny experience. “He was giving everyone the time of day, it was cool. He was very open to talking to people.”

Although the report alleges that Demi went home by this point, it does say that she stuck around for a while in the beginning – and we have to ask, is that smart? When you’re dealing with any sort of recovery, whether it be mental or otherwise, it’s not the best idea to go drinking and partying with friends or co-workers who are known to get hammered on a regular basis. Sure, you’ll control yourself initially but how many times will it take before you give in? Once, twice?

While all the reports point to Demi maintaining her professionalism on set, I don’t think anyone wants to see a repeat of her breakdown from last year. The only bright spot is that Demi seems to be taking it easy and not getting sloshed and dancing on top of tables like she used to. But she should still be careful about how often she goes and out parties.

What do you guys think about Demi and Kiefer partying together? Let us know your thoughts in the comments.