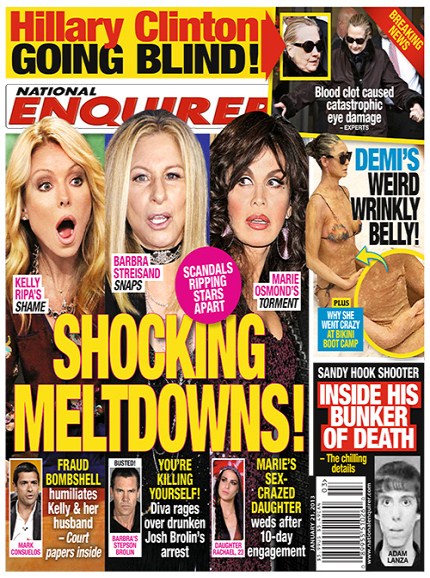 The holidays are hard for us all—the family pressure, mall chaos, shopping stress, and all that food!—but they’re even hard for our celebrity counterparts. The January 21, 2013 print edition of National Enquirer reports that Kelly Ripa is humiliated after husband Mark Consuelos has some nasty legal problem, causing the walking-ad-for-caffeine a meltdown! Pick up a copy to see their court papers. Barbara Streisand’s relationship with son Josh Brolin is on the rocks after his drunken arrest. The musical legend is terrified that Josh’s mid life crisis will end in a tragic death. We’ve heard that Josh isn’t thrilled about Streisand’s relationship with costar Seth Rogen, and is actually jealous! Marie Osmond’s family is shaken after her 23-year-old daughter Rachael Blosil marries after an engagement of barely a week.

After her emergency hospital visit last week, Hillary Clinton is back to work, but experts diagnose her with eye damage, which was caused by the blood clot she suffered in the brain. Their best guess? The Secretary of State is suffering blindness as a result of the injury. Is her condition permanent, or will she be able to recommit herself to her work? Will this push Chelsea Clinton to get pregnant even more?

Demi Moore is on extreme breakdown mode since Ashton Kutcher and Mila Kunis put their romance into fifth gear, and she got served with divorce papers. Disturbing photos show the actress in a bikini—which is none too flattering to her wrinkled, sickly looking stomach! Is her physical well-being affected by the emotional strain of the divorce?

The country came together after a tragic December shooting in an elementary school, and now National Enquirer also  printed a report on Adam Lanza, the Sandy Hook shooter, who apparently had a “bunker of death.” The profile gives chilling details on his disturbed life. Pick up the new edition, on newsstands today!