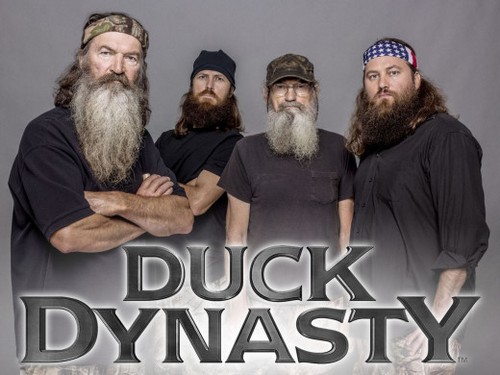 Tonight on A & E America’s most recognizable family is back for a funny, functional, and family-filled Season 4 of DUCK DYNASTY called, “Till Duck Do Us Part.” If you have never watched the show the Robertsons have built a multi-million dollar sporting empire manufacturing duck calls in Monroe, Louisiana and have earned a seat in homes across the country with their special brand of downhome practicality, southern charm and sharp sense of humor.

The show is so widely popular the Robertsons all got a big huge raise, a whopping $200,000.   I guess they got the raise because the season 3 finale of DD was a runaway hit for A & E.  It grabbed, wait for this….. 9.6 million viewers.  Can you believe?

On tonight’s show Everyone comes together to plan a surprise wedding for Phil and Kay, setting up a special ceremony on their land, which the whole family attends. Si distracts Phil and Kay by taking them on a “trip down memory lane” to different places that were meaningful in their relationship.

We will be live blogging the season 4 premiere of Duck Dynasty tonight at 10PM . . . so make sure to come back to this spot and watch the one hour show with us. Make sure to refresh often so you get the most current info! While you wait for the episode let us know how excited you are about the return of Duck Dynasty.  While you wait for the recap, check out the sneak peek of tonight’s episode below!

Board games have always been a staple in the Robertson Family household but that doesn’t mean they it comes without problems. Willie and his brother Jase are trying to play a friendly game of Battleship when their wives remind them it’s their parents’ anniversary. Korie, Willy’s wife, and the other wives want to do something special for Phil and Kay.

Willie, trying to be smart, points out they don’t have to because his parents weren’t traditionally married. So the girls take it upon themselves to suggest throwing a secret wedding for the parents. The more they talk about the more the women want to do it.

Later back at the office Jace and Willie are hounded with texts from their wives asking for their opinion on this and that. They’re all sad and defeated that Si gets it out of them what happened. The moment he does he can’t help laughing how whipped the boys are.

Meanwhile the boys’ parents are bonding at the fishing pond when Kay tries to get her husband to remember that their anniversary is coming up. She accepts her husband isn’t good with dates and she sometimes uses it. Last year she told her husband it was their anniversary around her birthday in order to get two presents. Still they have been married 48 years.

The wives call a meeting at the office. They try to enlist more than their husbands yet the men are hesitant to volunteer. Despite that the wives have elected Uncle Si to be the centerpiece of the wedding. He has to keep the married couple out of the house until 5. However 5 minutes into the call to Phil and Kay, he almost ruins the surprise. The wives try to stop him but the only thing that save him was that Kay couldn’t hear over the phone so well. If she did she would have been wondering why he was talking to someone else about a “surprise”. All she did get was that he was taking them out for ice cream.

Si comes to pick them up for ice cream and he’s late. In traditionally fashion he confuses them over why he’s late but still has to get gas. He apparently to drive slow to save up on gas and in order to be late he didn’t stop for gas. Makes no sense and yet he still sell it.

Willie and Jace are still fighting not to participate but his other brothers Jeb and Allen are happy to help. Allen is the only one without a beard probably because he’s a pastor. Still being perfectly shaved has Willie nicknaming him the black sheep of the family. And now they’re all subjected to Korie, Missy and Jessica’s (the wives) directions.

Si tries to surprise Phil and Kay by giving them a tour down memory lane. He brings them to a house he claims the couple first me but that’s not the house and it wasn’t Debbie Gibson that introduced them. Phil is pretty Debbie Gibson was a singer and not the owner of the crack house they’re looking at.

Next stop is a fireworks stand. Si thinks this were their old school football used to be. He’s wrong but Phil and Kay don’t point it out to him. Phil does get worried though when Si decides to grab some fireworks.

Third stop on their is a wooded area. Again no precious memories for Phil or Kay but Phil really is getting antsy about that ice cream they were promised. Si tries to tell them about a special tree and Phil is willing to pick a tree at random when they do find a special tree. It’s the tree he and his wife carved in their initials. Uncle Si finally got it right with this one.

At the house the plans look like there falling through. They got Mountain Man, their neighbor, to build the arbor but Willie is not so sure this guy knows what he’s doing. Then there’s Jace. He snuck past his wife to go down by the river and secretly fish. This is not all hands on deck.

Missy, Jace’s wife, does eventually find him and gets him back to work.
The wedding is all set up, Mountain Man came through, and Jeb came through with the cake. The boys were fighting over who will be their dad’s best man when their parents arrive. Kay is so happy when she what everyone did. She finally get the wedding of her dreams. And Phil doesn’t choose any of his sons to be the best man. He chose Si.

The wedding itself was beautiful even with Si giving speech in the middle. Kay and Phil got to say their own heartfelt vows and in the end Phil promised to carry her over the threshold.