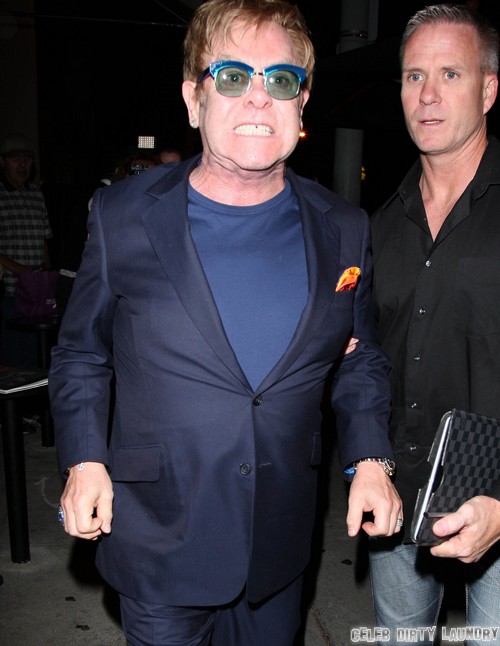 Here’s the thing. If you are a celeb out and about in Hollywood there are certain places that you just avoid like the plague- unless you want to be photographed. If you willingly walk into a place considered to be a paparazzi zone then you are fair game. Elton John, who has made no attempt to hide his general dislike of all paps and most media decided to have dinner at Craig’s last night according to TMZ’s waiting camera. Once Elton got out of his car he started swinging curses left and right at the rolling cameras. He got so flustered that he appeared to trip over his own feet in the way into the restaurant.

There are more than 9,000 restaurants in the L.A. Area so obviously Elton chose to visit Craig’s. He also knew that the paps would be camped out looking to get a shot of whatever celebs opted to have dinner there last night. Why do you think Elton went there in the first place? I understand that you can’t let your life be controlled by others but usually when someone hates a situation like flashing lightbulbs, they go out of their way to avoid it, right?

How come Elton did the opposite? Do you think he wanted a bit of the attention or was it just a bad day, the kind that made him happy to vent some frustration at someone and the paps were a great target? Is Elton just a glutton for punishment? The food at Craig’s is supposedly good, but probably not good enough to walk into a lion’s pit if you’re not desperate for the attention! Why was Elton really there? Tell us your thoughts in the comments below!