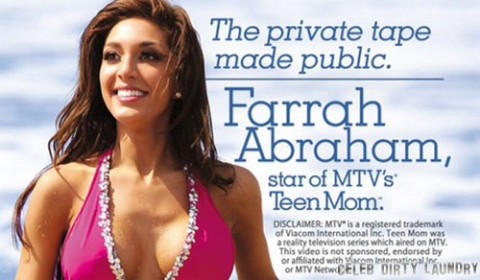 I guess Farrah’s tape is pretty gritty and much raunchier than Kim’s which might have helped boost sales. But if I were Farrah I wouldn’t go blowing my $1.5 million paycheck that quick. Save that money biotch. Lightening won’t strike twice for you. To get Kim Kardashian’s success you have to have longevity (and a business savvy mother and funnier and more interesting siblings). What’s so special about Kim’s tape is that it’s still the gift that keeps on giving. I know a few dudes who still watch it just for old time’s sake. I doubt Farrah will have the same appeal. Kim and her tape grew together. Farrah’s will probably fizzle out along with her new diet pill contract.

Still… I can’t hate too much. That piece of shit had a plan and she made it happen. She wanted money and she wanted to keep her 15 minutes going for awhile longer. She got both. If she expects and is greedier for more than shame on her. However, I could write a book on shame on her Farrah Abraham moments.