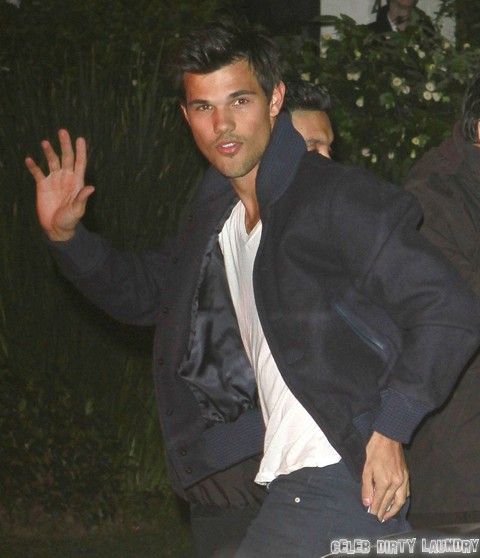 I’m no baseball expert, but I believe the expression this is totally out of left field could be appropriately used in this situation! We’ve been so focused on stalking our favorite vampire Ian Somerhalder winning the part of Christian that we forgot about Twilight director Bill Condon’s attachment to the adaptation of super-sexy erotic trilogy Fifty Shades of Grey. We warned you that Kristen Stewart may hobble on set as Anastasia Steele, seeing that she’s a favorite of Condon’s (he must become suddenly blind and deaf when she is acting—if only we were so lucky!), but it sounds like he has another Twilight alumni on the mind!

Screenwriter Kelly Marcel joined author EL James and producers Dana Brunetti and Michael De Luca at Chateau Marmont for an Oscar party/work conference. They all seem to be quite chummy, and aren’t at all private about it! Marcel shared a photo of the crew with Taylor Lautner, who came to fame playing temperamental werewolf Jacob. I just hate the thought of him as Christian Grey, but can we all agree that he could be an adequate Jose? We already know he can do the whiney, obsessive, possessive bit . . . that’s basically all that’s required of the role!

Whether or not he’s on the list of potentials, we know one thing for sure: the script is finished! Marcel landed the job back in October, and I’ve been tapping my foot impatiently ever since! EL James tweeted that “she had some very interesting reading,” and Marcel retweeted it! The day before, Marcel tweeted that she had “something to show” James. Completion of the script marks a few things: a director can be announced, now that a script can be read, approved, and tweaked. Most importantly? It’s time to start casting! The time for coy skirting of probing questions is almost over—can we all take a deep breath and imagine the day that Ian will tweet a photo of himself holding a riding crop wearing nothing but tight black jeans? Of course, we’ll still have to wait a year and a half for the release, but it’s progress!