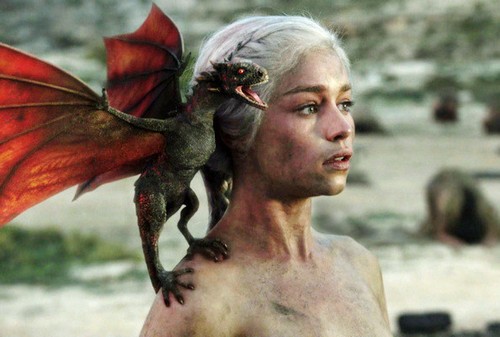 Tonight on HBO GAME OF THRONES returns with a whole new episode called, “Dark Wings, Dark Words.”   On tonight’s show  Sansa says too much; Shae asks Tyrion for a favor; Jaime finds a way to pass the time. Did you watch last week’s premiere episode?  We did and we have a full and detailed recap for you.

On last week’s show Jon Snow was brought before Mance Rayder, the King Beyond the Wall, while the Night’s Watch survivors retreated south. In King’s Landing, Tyrion asked his father for his reward, he wanted Casterly Rock but Tywin told him, “no way!”  Littlefinger offered Sansa a way out. Cersei hosted a dinner for the royal family.  Daenerys sailed into Slaver’s Bay to find slaves.

On tonight’s show  on next week’s show Jamie Lannister is taunting Brienne of Tarth, whats new?   He tells Brienne she was not Renly’s type, “He preferred curly-haired little girls like Loras Tyrell. You’re far too much man for him.”  Brienne is not interested in Jamie’s rumors, but Jamie is not one to stop and tells Brienne not to worry about Renly, his proclivities were the worst kept secret in court.  He finally gets Brienne’s goat when he says, “It’s a shame the throne isn’t made of cocks, they’d have never got him off it.”

Sansa says too much; Shae asks Tyrion for a favor; Jaime finds a way to pass the time; Arya encounters the Brotherhood Without Banners.

On the tonight’s episode Bran Stark is running through the woods. He’s hunting a crow with the help of his big brothers. He’s told by a mysterious boy that he can’t kill the crow because it’s him.

Waking from his dream he tries to explain his dream to Osha but she refuse to hear of black magic. She solely focusing on heading to the wall, and like Bran she doesn’t believe their safe.

Robb is with his wife enjoying their conversation when he gets news from his soldiers. He tells his mother about what has happened at Winterfell. According to reports everyone there is dead but his younger brothers haven’t been found. He’s hoping Theon has taken them prisoner.

Brienne and Jamie are still traveling South when he begins to antagonize her about her demeanor and finally who she chose to back in the Civil War. Mocking the late King Rennley; Brienne loses her cool. Before they can argue further a stranger walks in on them. The stranger may have recognize Jamie. It would be best for Brienne to kill him but she can’t.

At King’s Landing, King Joffrey is getting dressed when his mother questions him over Margery. Cersei tries to warn her son about Margery’s motives but he refuses to listen to a woman. No matter if she’s his mother.

Shae tries to warn Sansa about Peter’s motives. Sansa feels he’s being polite only because he was in love with her mother. Before Shae can continue cautioning her, Sir Loras interrupts to inform Sansa that Margery wishes for Sansa to visit to her.

After Loras has taken Sansa to meet Margery, they walk to meet the Olenna Tyrell, Margery’s grandmother. She is very wise woman. She admits her family committed treason with Renly. Although she seems harmless she begins to question Sansa over Joffrey. Being nervous and frightened over reprisals at first, Sansa does reveal a little but is too frightened. Only when Lady Tyrell reassures her that she’ll be safe does Sansa call Joffrey a “monster”. Althogh Margery and her grandmother don’t seem surprise. They reassure Sansa that wedding will stil continue. After all Margery will be Queen.

Robb Stark and his camp are on the move when he’s warned by one his comrades that he lost the war the moment he married his wife.

Talisa is trying to bond or at least no longer be afraid of Catelynn. They begin talking and until Catelynn mentions when Jon was sick. She admits she prayed for Jon and that as part of her prayer she promised to love Jon and treat him as hers. When he got better though, she went back on her promise. Now she feels that all of these bad things that have happened to her family; happened because she couldn’t love a motherless boy.

Jon and Mance Rayder are traveling together when Raydar discusses how he was able to build his army. He told them that they were all going to die if they didn’t head south. During their travels one of their men has visions. When they question him on what he saw. He could only reply he saw dead crows.

Sam and the brotherhood are traveling, after some teasing though he stooped and give himself a good cry.  His “friends” pick him up to keep moving but these were the same guys that abandon him originally.

Bran awakens from his sleep due to his wolf’s growl. Osha goes in search of what’s wrong which leaves Bran by himself. The mysterious boy from his dream comes into their camp. Along with his sister that pulls a knife on Osha. Somehow he calms the wolf before he introduces him and his sister.

Arya and her friends are traveling towards the North when she’s berated by Gendry over whose names she chose. He tells her she could have ended the war. Yet she steers them back to where they are going because they seem lost. Suddenly a group of men come upon them. They meet the Brotherhood Without Banners.  The Brotherhood reassures Arya and her friend that they’ll be safe.

Shae goes to Tyrion to discuss Sansa. They get a little sidetracked when Shae finds out that lady who warned her once slept with Tyrion. He tells her that no one trust Littlefinger. When he goes on to talk about Sansa’s future he accidently call Sansa a great beauty which only angers Shae. They makeup but Tyrion’s warning about her being careful appears to be ignored in favor for other things

Margery is summoned by Joffrey. He tells her that he’s leaving soon and wanted to speak to her before leaving. Joffrey wastes no time in asking her about Renly. Using his mother’s insinuations, he asks her about her life with a traitor. Margery manages to turn the conversation towards Renly homosexuality and how she could never “really” have been his wife. Flirting a little with Joffrey she asks him to show her how to use a bow. He calmly shows her and in his own depraved way he asks her if he could watch her kill something.

Theon is being tortured. They demanded to know why Theon took Winterfell. His constant change of story however leaves no one to believe him. When the mysterious group leaves him, Theon is contacted by a supposed ally of his sister. This stranger promises to come back and free him.

When Bran mentions his dream, his new friend apparently remembers the dream clearly as well. Bran shares visions with Jojen Reed but they don’t know why.

The Brotherhood Without Banners are eating and drinking with Arya when she lets pride get the best of her and pulls her sword. The Brotherhood’s leader agrees that Arya and her friends can safely leave. But before she can escape, the Brotherhood’s newest prisoner, The Hound, recognizes her and calls her a Stark.

Brienne and Jamie are still traveling. In the middle of his whining, Jamie apprehends one of Brienne’s swords. Dueling, Jamie tells her that if she kills him she fails but if she doesn’t he’ll kill her. Briennde doesn’t kill him because the traveller that they had passed before turns them in to a militia that plans to either ransom Jamie or turn him over to Rob.