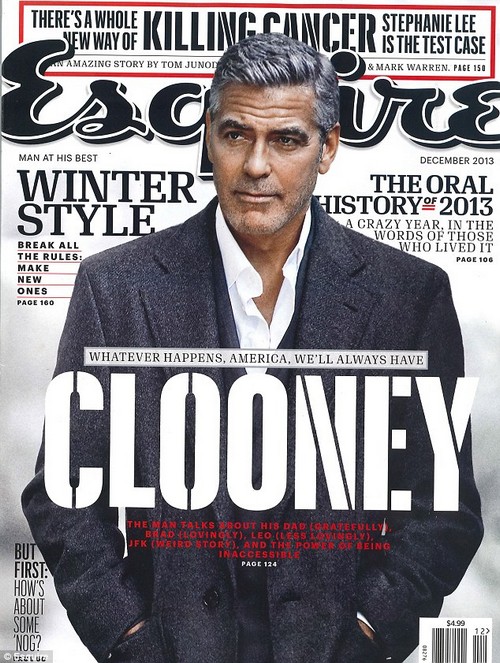 George Clooney covers the latest issue of Esquire Magazine and he’s truly not holding back in the accompanying interview. I think George has gotten to a point in his life where he doesn’t feel the need to censor himself, and he’s definitely earned it. As a prolific actor and producer who’s been in the business for more than thirty years, he’s definitely worked himself to the top of the A-list. So he’s earned the right to be a little bitchy, even if it’s looked down upon as being condescending or ‘rude’.

Anyway, George is super sarcastic when it comes to his feud with Russell Crowe, which started many years ago. George explains, “The truth is that [Crowe] did send me a book of poems to apologize for insulting the shit out of me, which he did. He picked a fight with me. He started it for no reason at all. He put out this thing saying, ‘George Clooney, Harrison Ford, and Robert De Niro are sellouts.’ And I put out a statement saying, ‘He’s probably right. And I’m glad he told us, ’cause Bob and Harrison and I were also thinking about starting a band, which would also fall under the heading of bad use of celebrity.’ And that’s when he really went off on me. ‘Who the f–k does this guy think he is? He’s a Frank Sinatra wannabe.’ He really went after me. And so I sent him a note going, ‘Dude, the only people who succeed when two famous people are fighting is People magazine. What the f–k is wrong with you?’ But then I had a year. Then I had Syriana and Good Night, and Good Luck, and he was gonna see me at the Golden Globes ’cause he was nominated for Cinderella Man. So he sends me a disc of his music and a thing of his poetry. I think he said, ‘I was all misquoted,’ and I was like, ‘Yeah, yeah. Whatever.’”

See: George at his bitchiest, which is great for the media. For all he says about the feud helping tabloids and People Magazine, he’s the one who’s starting it up again. So why say anything at all? I think he found an outlet to call out everyone who’s pissed him off in the past, and then taken that opportunity and run with it. For him, he’s a power producer and everyone in the industry kisses his ass – he’s not going to suffer the repercussions of calling out other A-listers, especially not when they deserve it. Because they do deserve it – he doesn’t say anything that’s not true, and Russell Crowe absolutely needs to be brought down to earth sometimes. Sure, 2013 Russell Crowe is significantly better than 2005 Russell Crowe, and sure, he apologized – but does that mean he should be instantly forgiven? Some people will say yes, but George knows what’s up. He knows it was a kiss-ass move, and he has no problem saying it.

What do you guys think of George’s comments in Esquire? Do you think he should have held back, or do you appreciate that he fully went for it? Let us know your thoughts in the comments.