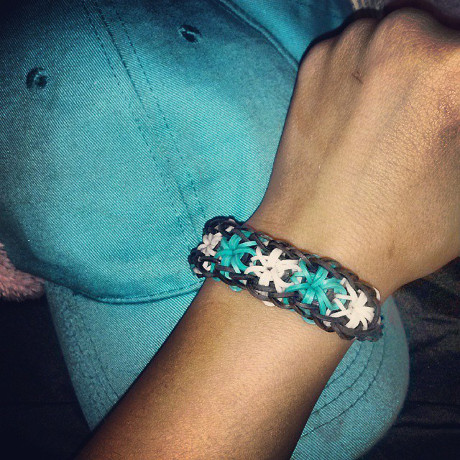 GinaMarie Zimmerman, who appeared on the most recent edition of Big Brother, is continuing her unhealthy obsession over fellow houseguest Nick Uhas. Now, I could be mistaken, but I always got the impression that Nick didn’t want to be romantically involved with GM — but it appears that they’re dating, or at least spending a lot of time together.

Recently, GM posted a photo of a loop bracelet she made that matches the color of Nick’s famous blue hat. Alongside the photo, above, GM said, “Made one for the haas. Miss u . See u soon @nickuhas #loopbraclets #bluehat #ykyt #bb15 #teamgm #teamnick.”

GM’s message says that she’ll be seeing Nick soon and, whether or not that’s the truth or just GM’s hope, well, I’m not totally sure. All I know is that on Big Brother 15, while Nick was still in the house, he didn’t seem to reciprocate the same crazy (borderline psychopathic-stalker-y) romantic feelings GM exhibited. Perhaps things have changed.

What do you think, CDLers? Is this beautiful loop bracelet a sign of their glorious romance spawned by the magical Big Brother house? Or is this just GM continuing her wishful thinking? Let us know your thoughts in the comments section below.