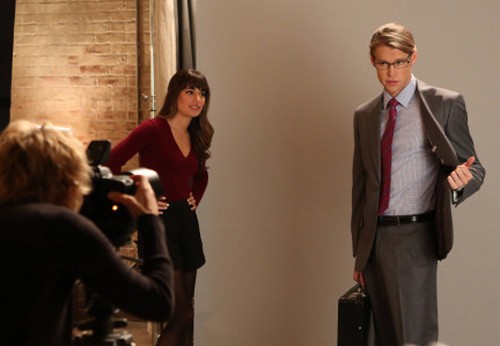 Tonight on Fox GLEE continues with a new episode called, “Movin’ Out.”  On tonight’s show the seniors make plans for their futures.  Did you watch the last episode?  We did and we have a full and detailed recap, right here for you.

On last episode the glee club learned the dance of the hour: twerking. Meanwhile, Marley discovered Jake’s relationship with Bree, and Rachel (Lea Michele) tried to convince Kurt they both should get tattoos.  Marley was soon going to discover Jake’s relationship with Bree and we may witness the heart rending breakup. In the end Marley sang the heartbreak song “Wrecking Ball” by Miley Cyrus.

On tonight’s show the New Directions pay homage to the Piano Man: Billy Joel. As graduation looms closer, the seniors make plans for their futures beyond the halls of McKinley.

RECAP: Will walks through the halls and finds Sue near the trophy case, Will talk about jobs with Sue and graduation; because they’re going to enter a difficult period in the job market. Will is questioning why there is nothing about getting into Broadway, music or anything of the arts. Will walks in to talk to the Glee Club about the arts not being in the career fair, Will then mentions that it is hard to get into stardom. Will tell the Glee Club about Billy Joel how he had to go through hell in orders to pursue his dream, he’s a true inspiration in becoming successful in a career in the arts. Sam and Blaine give their own take of Billy Joel’s Movin’ Out, before they go and pursue a career in the arts. They sing from the Glee Club, through the halls, into the subway and now in the bus making their way to see Kurt and Rachel. Arty goes up to Becky to ask her about what she plans to do after school, she asks the same question afterwards to Arty. Arty wants to go to film school, then brings up that he know many schools for the mentally handicap to help her out to go to college; Sue comes up and interrupts and says that Becky is going to be her secretary for ever. Marley opens her locker and it’s full of roses, Jake walks up with a rose in his hand to apologize to her for cheating on her; Marley is upset with Jake and is upset with him. Blaine and Sam are at the restaurant Kurt and Rachel work at, Kurt sits with both of them to talk about what their wanting to do; Kurt takes Blaine onto the stage at the restaurant to sing and play piano. When Blaine plays Piano Man by Billy Joel, Sam joins in with the harmonica. Everyone at the restaurant begins to dance and sing along with Blaine, and then it ends with everyone clapping and cheering. Kurt says that Blaine will definitely be able to pursue his dreams that nothing’s impossible. Arty rolls up to Becky again saying that he’s done more research on more colleges for her and he mentions that she can do cheer leading at college. Becky is excited to know about doing cheer leading in college, but she tells him to but out. Rider goes and confronts Jake for cheating on Marley; Jake doesn’t understand himself either in why he did what he did. Jake starts to sing Billy Joel’s My Life, which is to represent in what he’s currently feeling. Sam goes into to speak with a counselor about his grades getting higher in classes, the woman wants to know why Sam wants to go into Hunter; same says it’s because there’s more women at the school, it’s obvious he’s not doing it because he cares about women’s rights. Sam asks then if the woman knows Mercedes Jones. Sam tells Rachel that he doesn’t want to go to college, because he doesn’t like it. Rachel says that he doesn’t need to do it, Sam says that he’s always has wanted to become a male model. Sam has a clear vision about becoming one also, about seeing himself as an underwear model and his picture is on a bus. Rachel tells Sam to eat up; she’s going to get some shots of Sam to help him become a male model. Becky tells Arty to stop stalking her, Arty says he’s not; but he wants her to chill and relax, while listening to him. Arty begins singing Billy Joe’s Honesty. Becky then realizes that Arty has been telling the truth, she gets the wrong message; Arty then says that he understands that she’s afraid of college, because she doesn’t want to be made fun of while she’s there. Arty tells her that’ll she will have many friends, counselors and professors there who’ll have her back.

Marley talks about how she was hurt and angry after finding out Jake was who he was, she’s still not happy about Jake cheating on her. Marley still misses Jake, Marley talks to her mother about everything with Jake; her mom talks about her waiting for her first time for someone that she loves, cares and trusts.  Rachel shows her photography friend Sam, Sam begins to pose for his photos that he’ll be sending to agencies. Same takes off his clothes and gets oiled up a bit to show off the guns and what not. Sue calls Arty to roll his butt into her office, Sue doesn’t look too pleased she takes out a hammer and puts it on the chair. Sue says that she went and got an ear dish for Arty at a pharmacy, to help him hear well; because he didn’t listen to Sue about bothering Becky. Sue says that Becky isn’t ready to go yet; Arty believes that Sue is the one who’s not ready to have Becky leave her. Arty talks about he found a school with a good program for people at down syndrome, Sue wants to know if this place has Wi Fi and cafeteria food. Marley is getting hit on by Rider; she says that she doesn’t feel like dating anyone at the moment because she wants a break from guys. Rider begins to sing Innocent Man by Billy Joel. At the end Rider asks if Marley will go out with him, Marley agrees to.

interview, Blaine says that he doesn’t want to get into a arts school; turns out that Blaine might like to become a teacher or get into medicine, this is Blaine’s true passion apparently. Though Kurt knows that Blaine is feeling scared at the moment to pursue what he loves, Blaine is afraid about not getting into it. Blaine says thanks for know him so well to Kurt, they hug it out and say I love you. Arty takes Becky to the college that they want her to go to. Becky is asked if she’d like to sit down and watch the class, she says sure and sits down to watch it. Sam is sitting in his interview; the woman really likes the way Sam gazes and the look of his lips. The woman wants Sam to get better pictures, because the ones he has aren’t great enough. She talks about male modeling not being something that’ll make him a ton of money, but he’ll be hearing many no’s then yes’s in this type of career. Sam has to lose ten more pounds before he can get his pictures taken, because apparently the woman says that cameras like starvation; sounds pretty stupid, but alright. Rachel asks if Sam wants to eat something, but Sam needs to lose weight for his picture; Blaine decides to settle this argument with a song, Blaine and Kurt begin singing Don’t Go Changing by Billy Joel, during it Rachel joins in. Then Sam gets up and joins the three of them singing. Santana who didn’t want them singing, ends up joining the four of them. Becky walks in to say goodnight to Sue, Sue asks “That’s it?” Sue wants to know about college, Becky said that it was okay, but in truth that it was awesome. Sue wants to know if Becky is ready for this, Becky says that she’s out grown these “high school bitches”. Sue then asks if Becky wants help with writing her application essay, Becky says its fine for her to. Rider pops up out of know where and asks Marley to check out her Instagram, she looks at the photo and sees that its edited with hearts and stuff. Jake comes up from behind and then asks if they really are a thing, they both are; Marley then says that they’re not really going out after one date, that she still needs time. Will walks up to talk to Sue, Sue then talks about how the kids won’t make it big in fame with singing. Then Blaine and Sam pop up and tell the Glee Club and Will about what they went through, Will and the Glee Club begin to sing Billy Joel’s You May Be Right.