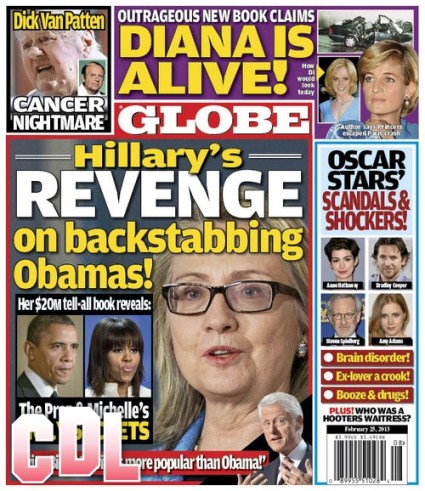 This week’s GLOBE features some remarkable stories and the most amazing one is about Princess Diana.  Most everyone thinks that Prince Charles’ ex-wife, Princess Diana, died after a tragic car accident.  In fact there is photographic evidence of Diana’s last minutes provided by none other than the same Italian Chi Magazine currently publishing photos of Kate Middleton’s Bikini Baby Bump! In any case a book is a book and the printed word still carries weight.

Suppose we give this outrageous new book a minute of our time and ask a few questions: 1) if Di is alive then where is she? 2) why did she participate in the faking of her own death? 3) Are her fellow passengers during the fatal drive and crash, boyfriend Dodi Fayed and driver/bodyguard Henri Paul alive or dead? 4) What has Diana been doing all these years and do Prince William, Prince Harry, and other royals know she is alive?

We do know that true to form GLOBE will address all of our concerns regarding this potentially shocking news.  Imagine if Diana is alive!  What a wonderful thing that would be!  Everyone, outside of a certain circle of the Royal Family, would be overjoyed.  The Duchess of Cambridge would have a kindly mother-in-law, no offense to Camilla Parker-Bowles of course, Prince William and Prince Harry would have a mom, and most amazingly of all would be that Queen Elizabeth’s great-grandchild and heir to the throne, Kate’s baby, would have another grandma!

GLOBE also features a major scandal involving Hillary Clinton, President Barack Obama, and the FLOTUS, Michelle Obama.  It seems that not only has Hillary’s popularity surpassed the President’s, according to Bill Clinton himself, but she is planning a revenge tell-all book!  GLOBE claims that all of the Obamas ‘ugly secrets’ will be revealed.  Do you think Hillary will risk her political future to make her former political rivals look bad?  I’m certain that GLOBE will let us know.

GLOBE features an Oscar nominees special report that exposes brain disease, drug and booze issues, and past crooked associations amongst Anne Hathaway, Steven Speilberg, Amy Adams, Bradley Cooper and others!!  And guess who was a Hooters waitress?  All these people and more will be under GLOBE’s investigative reporting microscope in this week’s amazing February 25th print edition.

Poor Dick Van Patten – according to GLOBE the brilliant Hollywood all-around talent is suffering a cancer nightmare.  We wish Dick all the best luck and strength in his fight against this awful disease.

GLOBE presents a lineup of reading this week that nobody should miss.  With reporting courage and integrity GLOBE explores the stories that matter to you.  GLOBE shares a balanced perspective and insight that is second to none and always produces top quality entertaining journalism.  I’m heading out to get my copy as soon as I get this posted!