Dancing With The Stars Season 18 Cast Spoiler: GG of Shahs Of Sunset Practices With Cheryl Burke 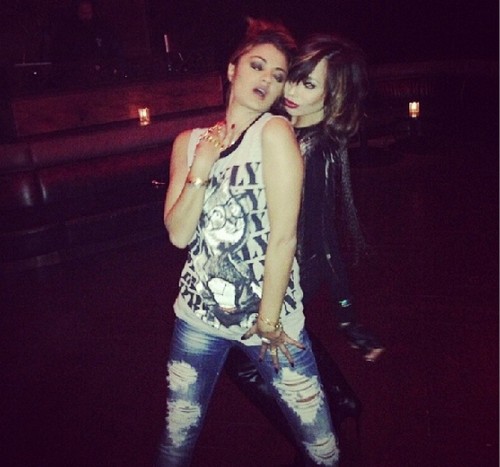 Just last week Glee’s Amber Riley was crowned the winner of Season 17 of Dancing With The Stars, but fans are already buzzing about who may be appearing on DWTS 18. Seeing as how ABC cast Bill Nye The Science Guy in the last season, it could be anyone, even GG from Bravo’s reality series Shahs of Sunset!

Today Golnesa “GG” Gharachedaghi posted a photo on Instagram of herself dancing with Dancing With The Stars alum Cheryl Burke, along with this caption: “Practicing my moves with @cherylburke for Dancing With The Stars! I’m not quite sure what I’m doing here but it’s better than my twerking!”

So, is this GG’s way of secretly announcing she will be appearing on Dancing With The Stars Season 18, or is it just her wishful thinking? GG’s fans on Twitter seemed pretty excited about the idea of her performing on DWTS. Cheryl Burke even responded and said, “You definitely got some moves girl.” GG’s new boyfriend Dennis DeSantis didn’t seem too confident in GG’s dance moves, he quickly responded “Please don’t embarrass us babe on national tv with 25 million viewers.”

Ironically GG has been compared to reality TV star Snookie (of Jersey Shore) multiple times, and even been referred to as the “Persian Snookie” on social media sites by Shahs of Sunset viewers. Snookie just appeared on the most recent season of Dancing With The Stars, so the idea of GG being cast as a dancer isn’t THAT far-fetched.