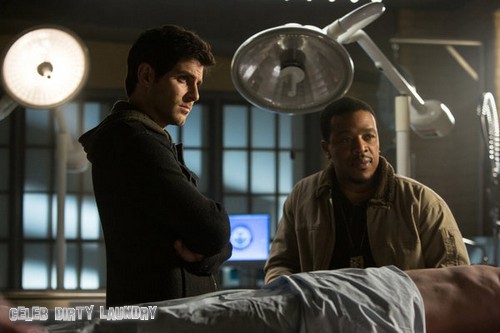 Tonight GRIMM returns to NBC with a new episode. On tonight’s show called, “Goodnight, Sweet Grimm.”  On tonight’s show the Royals bring their agenda for Nick to Portland – James Frain and Shohreh Aghdashloo guest star. Did you watch last episode? We did and we recapped it HERE, for you!

On last week’s show Nick and Hank discovered a new kind of strange when they investigate suspects being found dead – for the second time. In Europe, Adalind found herself in the middle of a feud between Frau Pech and Stefania while working over the details of her pending transaction. Meanwhile, determined to remember every last detail to get things started once more, Juliette (Bitsie Tulloch) insisted Monroe (Silas Weir Mitchell) share with her Nick’s darkest secret – the world of Grimms and Wesen. Sasha Roiz, Reggie Lee and Bree Turner also starred.

On tonight’s show just when things look like they’re back to normal with Juliette (Bitsie Tulloch), Nick (David Giuntoli) is called to investigate a flurry of rage-fueled assaults happening all over Portland. He goes to Monroe (Silas Weir Mitchell) and Rosalee (Bree Turner) for help battling Portland’s newest wave of “undead.” As if that weren’t enough, Captain Renard (Sasha Roiz) informs Nick that his brother Eric (guest star James Frain) is in town on family business. Meanwhile, Stefania (guest star Shohreh Aghdashloo) and Frau Pech methodically use their alliances with Adalind (Claire Coffee) to battle one another. Russell Hornsby and Reggie Lee also star.

RECAP: Prince Eric and his friend, Voodoo Deity, are enjoying dinner. They were in on everything together. Eric decides he wants to see a demonstration of his friend’ work. He calls in one of security personnel and sacrifices the guy for entertainment.

Juliette and Nick are on their date. Instead of eating, they’re both too nervous, they instead talk about the Grimm world. Nick tries to justify his secrets by saying he was afraid Juliette wouldn’t be prepared for it. Not that Nick was much prepared after being Grimm only a year. No matter the complicated life they will have; both agree to still being in love with each other.

The Zombies are pushed into action and are preampaing to strike Portland.

Monroe and Rosalee are having dinner. They are about to clean up when Rosalee rides roughshod over Monroe nerves and makes the first move.

Across the ocean, Fraulein, the once helpful witch is mixing a potion. But for what? Fraulein sent her little potion in motion. It was to knock out Adelaide. With Adelaide unconscious, she then takes a sample out of the pregnant woman from her spine.

Captain Rennard hears from his spy. He’s still trying to figure out what his brother has planned when across town the first public zombie attack happens. The zombies unleash an untold violence with all they encounter. Apparently news still hasn’t filtered into the police office because Rennard calls in Nick, interrupting a reunion with Juliette, to discuss his brother’s accomplices.

Rennard just finished setting a meeting with his brother when Wu informs them about what’s been happening outside. Nick goes with Wu to investigate. They arrive on the scene to see a complete destruction. The zombie bit Wu before falling through a window thanks to Nick. Yet the fall didn’t affect her. There’s another zombie in the building. Nick and Hank sneak the body of the second zombie out to the car.

At the Spice Shop, the boys are telling Rosalee and Monroe about their zombie problem. Rosalee does find a cure but its three shots and it can only be administered after the zombie become homicidal. Hank and Nick leave the zombie behind when they return to the office. It’s not too long before the zombie awakens. The first shot is given.

Nick and Hank investigate the zombie’s life. They know the mechanic met up with Voodoo god earlier.
Fraulein uses what she took out of Adelaide. It helps her impersonate Adelaide. Which come in as handy when the gypsy queen calls and unknowing tells Fraulein what she plans to do with her.

Rennard makes the meeting with his brother. They’re talking about the key. The one Nick has. Eric waves a peace offering in front of Rennard. If Rennard gets the key, he will be allowed to return into the royal fold. Eric leaves town after Rennard agrees to think about the offer.

Nick believes he’s being played. There are too many clues the deity merely left behind. He returns to his place with Juliette. She wonders what been happening. After some reluctance, Juliette convinces Nick to speak openly and also to move back in. Monroe calls with good news that zombie is back to human. Nick is about to leave when Juliette demands she goes with him.

Fraulein arrive to meeting with the gypsy queen. It’s revealed that Adelaide can only get her powers back is to steal the beating heart from a witch. Unbeknownst to Fraulein, they knew what she would plan. She actually walked right into their trap.

Nick and Juliette show up at the spice shop to question the mechanic. Juliette asks the guy what kind of a creature he is. Monroe puts a kabash on that before she blows their cover. Juliette is going with them to give out the cure. Before they leave, Nick hands the key to Rosalee to hide.

They reach the containment yard. The deity sees them then opens containers upon containers of zombies. There’s not enough antidote. They had walked into a trap. Nick is separate from his friends. He spots the deity and gives chase.

They fight and fall into one of the containers. The deity is able to get the green poison into Nick’s eyes. The rest of the gang make it to the car but are surrounded by zombies.