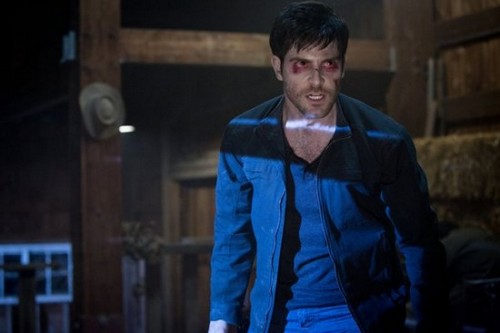 On episode 3 of GRIMM called, “PTZD,” the show starts off with Nick walking through the forest aimlessly in a first person point of view, Monroe and Hank are trying to catch up with Nick; they’re getting close thanks to Monroes perks to being a Werewolf. Hank calls Sean and tells him that they’re on his trail and that they could find him soon. Nick is looking at a family entering their house, it appears that Nick may try to hurt them. Nick starts to run towards them, the family are completely freaking out and trying to get into their house. Thankfully the father gets his keys in time and opens the door, him along with his family make it inside and they run up the stairs. Nick comes at the locked door and smashes a hole through it, he then looks up as the family go up the stairs.

The family are running into a study room of some sort, the father tells his wife to take the kids into the closet while he tries to deal with this rampaging Nick; Nick is bashing on the door and trying to get into the room. Monroe once again loses Nick, but him and Hank hear the screams of the children from far away; they enter the house and make their way upstairs. The father of the family almost ot the gun from the case, but was hit onto the floor; Monroe and Hank come at the perfect time and try to fight of Nick. Nick ends up hurting the father of the family, by pushing him against a wall; Hank throws a statue at Nick and then runs away to lead Nick away from the house. Monroe accidentally knocks a lamp on the ground and that catches Nick’s attention. Sean calls Hank to see how they’re doing, Hank tells Sean the address of where they’re at for back up. Monroe and Hank end up running into a barn, they climb to the top floor using a ladder, Monroe accidentally breaks a floor board once again catching Nick’s attention. Hank and Monroe are tying to talk Nick out of fighting them, Nick ends up falling through the floor boards. Hank and Monroe decide to drop a metal grate over the hole he fell through trapping him for now. Hank mentions how Nick is now more of an animal than a man, the father of the family walks outside with a gun he wants to deal with Nick. Sean ends up telling the man that Nick is someone else, giving him a fake name. Sean along with Monroe and Hank, Sean and Hank decide to enter beast mode to fight against him.

Nick is overpowered beyond belief at this point, he’s taking on all thre of the guys; Monreo, Sean and Hank are no match for him at this point. Hank decides to pull out a gun at Nick, Juliette stabs something into Nick, but he hits her away. IT looks like what ever she stabbed Nick with, it worked really well because he’s feeling some sort of effects from it. They decide to take Nick away, before the cops get involved with this. Nick’s pulse is getting low and is starting to get weaker, he opens his eyes and sees Juliette. Juliette continues to try and console Nick saying that everything is going to be okay. Adalind is still trying to complete the ritual, this time it seems that she was successfull. Nick receives a second dose of the antidote, to hope that reverts him to his regular self. Sean goes back to work, while Monroe, Hank, Juliette and Rosalee are staying behind with Nick. Nick’s body starts to move on it’s own, in an agressive manner; they decid to hand cuff him in case. Adalind begins to sew up the dead body of the old woman, sadly she comes to the point where she needs to bite at knot out of the thread. Sean receives a text from an unkown person, he goes to his ofice and checks on his laptop news. Eric Renard is on the news, he recently died after driving in to a theatre.

Monroe starts talking about how the royals have been doing a lot to jsut get a Grimm, Hank agrees and believes that there must be an importance in it. Nick awakes from his comma like state, he starts asking questions about what’s going on and why he’s handcuffed. Hank takes off the handcuffs, Nick wants to know how he got to where he is and they reply they brought him. Nick asks if anyone was in an accident due to the wounds on Monroe, they try to find out how much Nick can remember. Nick remembers chasing the “Hat Dude” he vividly remembers everything until there, he can’t remember becoming a rampaging lunatic. Juliette tells Nick about what happened to him while he was unconcious. Sean calls a man, checking to see if he’s on vacation or not. Sean asks the man about his extended family, a knock comes to Sean’s office door; he lets in the man and mentions how someone ended up dying in the bar brawl. Sean was the one who took the footage from the bar, he wanted to make sure that no evidence would be found of Nick rampaging. It then cuts to showing a flashback of Sean destroying the room and taking the footage, now Sean is looking at the footage from the camera’s of Nick kicking all of the peaople’s asses in the bar. Sean hides the evidence in his desk and locks it, to make sure no one will ever find out. Everyone is talking about how Nick was under the influence, though there’s nothing to worry about since no one was hurt in the process; little do they know though. Juliette mentions that Nick eeds a bit of down time, everyone agrees to doing so also. Nick mentions that he’s glad that he killed no one, but he sadly did and will find out later. Wu mentions how there was only one fatality at the bar fight to Hank; Hank then walks into Seans’ office to talk to him about it and to find out with what they’re going to do about the current situation. Sean tells Hank that they need to protect Nick with lies.

Juliette and Nick are in bed, Nick is still sleeping; but Juliette gets up to pick up a call from Hank. Hank tells Juliette to come and meet up with everyone to talk about something important, obviously about Nick killing a man. Juliette arrives and Sean mentions how Nick ended up killing a guy due to the brawl in the bar. Rosalee doesn’t blame Sean for giving a fake identity, because he didn’t do it intentionally. Juliette mentions what about the evidence in the cameras at the bar, but Sean takes it lightly and says none has been found. Everyone is going to lie in order to protect Nick, Sean mentions that Nick won’t be finding out any time soon. They’re going to lie about chasing an infected suspect by the name of Thomas Shewreck, Nick is lying in bed, but it seems that he’s beginning to becom infected in time. Hank goes and talks to the people who are working on the bar fight case. Hank talks to Sean about the surveillance system at the bar being trashed. The two investigators arrive in Sean’s office and ask questions about the bar fight, he writes the two names of the women who were at the bar with him; Juliette and Rosalee. Juliette sees that Nick is eeling cold once again, she sees that Nick is in a state of a coma once again.

If you cannot wait for next week’s season 3 episode 3, “A Dish Best Served Cold,” we have a sneak peek video and the official synopsis below for you: