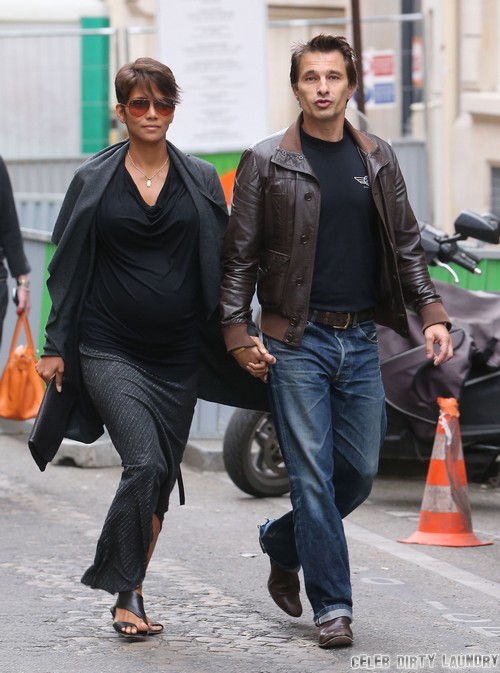 Halle hasn’t has an easy time with relationships in general much less marriage. This actually would be her third attempt at wedded bliss. Her prior trips down the aisle resulted in one case of domestic abuse and another for serial philandering. Then there  is her original baby daddy, Gabriel Aubrey, who she fought and failed to get a court against. As a matter of fact Olivier wasn’t looking too promising earlier when he damaged his hand on Gabriel’s face. Yet he’s now hubby #3!!!

There were some bets that Olivier would eventually dump just so he didn’t have to keep flying from France to L.A. Even when Halley first announced her pregnancy, Olivier was already flying to Paris instead of presenting an united front with his fiancee. I guess he must have come around to L.A. Because as long as Halle’s daughter remains underage, she’s not allowed to move to France against Gabriel’s wishes. At the time the court made this ruling, she made a remark like she’ll move to France after Nahla turned 18. I had laughed outright that she believed she’d still be with Olivier for so long. Maybe I shouldn’t have.

Look where they’re at now. She’s happily married and Olivier is still smiling despite the shotgun wedding. Will this marriage work out? It’s highly unlikely. The two are happy now and Olivier has grown accustomed to thinking his son will be American but this marriage isn’t going to work. Once the that baby becomes a little boy; Olivier is not going to like his son being in the same spotlight like Halle’s daughter. She hasn’t made a good movie in years (ever?) but photographers love her.  They’re going to want pictures of her and her family.