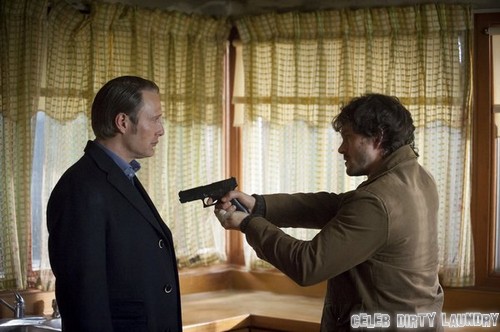 Tonight on NBC HANNIBAL continues with an all new episode  and their first season finale called, “Savoureux.” On tonight’s finale Suspicions rise about Will being a killer when he returns from Minnesota without Abigail and evidence ties him to murder. Will is soon arrested, then plots an escape and goes to desperate extremes to prove his innocence.  Did you watch last week’s show? We did and we recapped it here for you!

On last week show Will (Hugh Dancy)  almost completely broke down when he visualized himself killing Abigail (Kacey Rohl) in the lodge, but he didn’t do it. Georgia  (Ellen Muth) accidentally burned to death, but Graham was convinced she was murdered. The last episode made us believe that Hannibal (Mads Milkkelson) was going to kill Abigail for finding out his little secret, that he actually murdered more people than her father.

In the season finale tonight Hannibal turns Will in after he returns from Mnnesota without Abigail. Jack (Laurence Fishburne) and the BAU team have a ton of evidence against Will that he killed Abigail and everything points to him being the Copy Kat Killer. Jack and Alana (Caroline Dhavernas) come to terms with Will actually being capable of murder. Will is arrested, but is so desperate to escape in that he breaks his thumb trying to get out of the handcuffs and it works. Will then takes Hannibal to Minnesota, he wants to clear his name and prove to everyone that Hannibal is the actual murderer but before that all happens, some ugly things are going to go on.

Tonight’s season 1 finale looks like it is going to be amazing, so be sure to tune in for our live coverage of NBC’s new series at 10:00 PM EST!  While you wait for our recap hit the comments and let us know how excited you are about this new series so far.