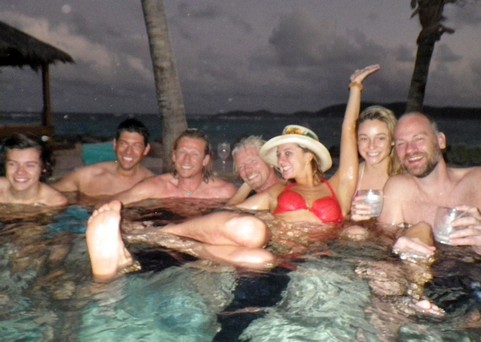 After all that pressure about marriage and babies from Taylor Swift, after only two short months together, I’m not too surprised to hear that Harry Styles went running in the opposite direction. Their relationship went down in flames during a quicky trip to the British Virgin Islands and before Taylor’s flight home even landed, Harry was already flirting and partying with billionaire bikini clad babes.

Taylor no doubt cried all the way back to LA, trying to figure out why she can’t seem to rope a guy into staying with her but in the meantime, Harry was celebrating his freedom. He was spotted having a blast on Richard Branson’s Necker Island and getting reacquainted with a particular hottie, British Internet entrepreneur and reality-TV star Hermione Way. In other words, Harry is acting like an 18-year old guy that has a world of opportunities and options right in front of him. Can’t really blame him for that either. I’d rather see the guys from One Direction having a bit of fun than tied down with a wife and stroller before they can legally drink!

I’m pretty sure that Taylor completely disagrees. Watching her ex move on and have fun publicly, immediately after she left speaks volumes. Not only wasn’t he going to put a ring on it but Taylor was obviously pretty disposable and replaceable! That’s a new angle for a song. She’s never written about feeling replaced before! Seriously, do you think it’s wrong of Harry to be partying with Hermione or is it healthy given his age, not to put all of his eggs in one basket?

As for Taylor, well she never wastes any time moving on to the next guy so do you have any guesses who we’ll see her parading with next? I think she really needs to take some time to be alone and figure herself out but I don’t think she’d actually going to do any such thing, do you? Tell us your thoughts in the comments below!