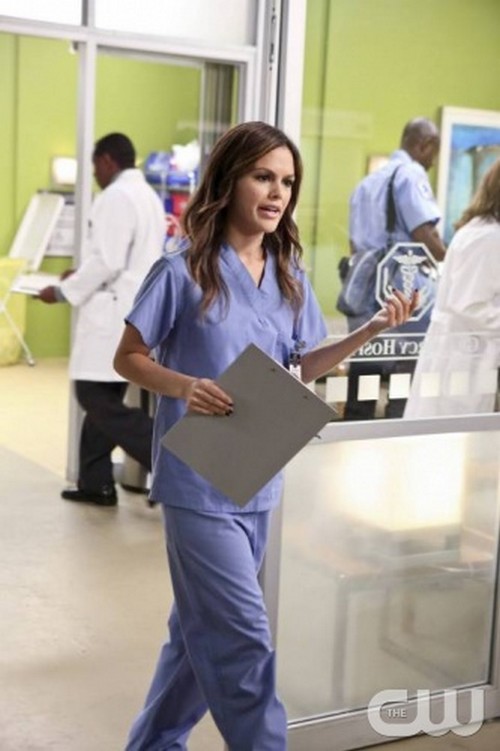 Tonight on the CW HART OF DIXIE returns a whole new season and a new episode called, “Who Says You Can’t Go Home.” On tonight’s season 3 premiere episode Lemon also devises a plan to help Wade (Wilson Bethel) save face in front of Zoe.  Did you watch last season’s finale?  If you want to catch up before tonight’s episode there is a full and detailed recap, right here.

On last week’s episode after having a rough time in BlueBell, Zoe decided a little time in New York City might be the perfect opportunity to give her some much needed perspective. But a medical emergency on the plane forced her to complete the trip with an unexpected companion. George struggled with his constant relationship misfortunes, until he ran in to Lily Anne, who helped him with his heartache.  When Lemon promised that the Rammer Jammer would be having a special concert with the band Gloriana, she had to scramble to make it happen, with the less-than-enthusiastic help of Wade. Meanwhile, Lavon discovered that the opposing town’s Mayor has stolen something dear to him and enlisted the help of the townspeople to get it back.

On tonight’s show After spending the summer in New York City, Zoe (Rachel Bilson) is ready to make her move more permanent, but first she must return to BlueBell for one last thing. Upon her return Zoe, discovers that no one in town is very happy to see her, except for Lavon (Cress Williams). Desperate for Brick (Tim Matheson) to give her a good reference, she agrees to help him track down George (Scott Porter) and get him to resurrect the Founders Day parade that has been canceled. Needing to find George quickly, Zoe enlists Lemon’s (Jaime King) help but accidentally discovers Lemon is hiding a dirty little secret. Meanwhile, Lemon also devises a plan to help Wade (Wilson Bethel) save face in front of Zoe. Kaitlyn Black also stars. Josh Cooke (“Dexter”) guest stars. Bethany Rooney directed the episode written by Leila Gerstein.

Tonight’s episode looks like it is going to be great and you won’t want to miss it, so be sure to tune in for our live coverage of CW’s Hart of Dixie at 8:00 PM EST! While you wait for our recap hit the comments and let us know how excited you about the new season, so far!  Also check out a sneak peek of tonight’s episode below!

Zoe hart said she was spending three months in New York when she ended up spending five months instead. She sent everyone back home emails stating “goodbye forever”. She wanted to start over in New York with a new job and a new guy. Just one hiccup from that. She never got the reference Brick was supposed to send her weeks ago. Her new job needs that letter.

Another blast from her past was Rose. The cute and weird teenager she befriended in Bluebell came up to New York for her Mode UN field trip. It seems Zoe forgot her promise to take her to the city for her sixteenth birthday. It doesn’t matter anymore though because Rose is angry that Zoe abandoned her. Nothing Zoe can do now will fix that.

Seriously, Zoe needs to get that letter and so she’s heading back to Bluebell. Her new boyfriend says she can tie up loose ends and makes thing right with other people that may have gotten hurt. Ironic as the first person she runs into back down south is Wade. He’s not angry. He came to have no regrets but he can’t say everyone else will feel the same way about her that he does.

She doesn’t help her case by interfering in a moment of silence at church. Lavon is the second and probably person in town not to hold a grudge. Why is everyone so angry? Well, after she left, George left. The town didn’t have a town lawyer so when they got sued they only had an elderly man to help but he keep falling asleep in court. That’s why the town hates her. Except Wade, Lavon, Annabeth, and Lavon’s cousin who moved into her old carriage house leaving her to stay at a motel.

Brick is willing to sign that letter on one condition. She has to find and bring back George Tucker. She didn’t have to search for him for long. He’s at the same motel as she is. He is a mess. Zoe needs him to snap out of it and goes to Lemon for help. No one else can drive him out of there like Lemon can. Some drills and she has him appearing at court.

He wins the case for Bluebell. Allowing them to make all the noise they want at the Founders’ Day Parade. The town likes her again with Wanda admitting she really missed her. Zoe promises to stay in touch but as she’s about to catch her flight Earl interrupts. Wade’s dad has blood poisoning but he refuse to see Brick or go to a hospital. She calls in Wade to help yet he can’t change Earl’s mind. Wade has to stay and wait it out with Zoe.

The whole town is wondering who Lemon has been secretly seeing. They’ve harassed Annabeth to find out so she goes to Lemon. All she got from her is that it was too shameful. Later she sneaks her keys to Meatball of all people.

Zoe is apologizing to Wade about how she left when Brick comes in with a visitor. Her boyfriend Joel came down to Alabama to see her.

One of the reason George fell apart was not only because of Zoe. He tried to get back together with Tansy and she turned him down. She’s back in town too with her boyfriend, Scooter. He’s the lawyer for Filmore that has been suing Bluebell.

Lemon admitted her secret to Wade and even he was shocked. However nothing can take away Zoe’s boyfriend being town. So hatching a plan, Lemon pretends to be Wade’s girlfriend. She thinks it will help Wade feel better knowing that Zoe won’t pity him. He appreciated the thought when he finds out.

Zoe got to participate in the parade and as she’s looking around town one last time Lavon tells her maybe she should rethink leaving. He knows deep down she went to New York when thing got too hard down here.

Lavon’s cousin has been nothing but trouble to Lavon and Annabeth. She’s annoying and she’s getting over her ex. She goes out drinking and finds George. The same George that has been MIA for several months and doesn’t know who she really is. The two decide to take the party back to his room.

Zoe is staying in Bluebell and so is Joel. Zoe makes sure that Wade is ok with that and she tells him she’ll be ok with his new relationship with Lemon. Wade had the opportunity to come clean when he chose to kiss Lemon in front of Zoe. He didn’t want to be pitied in the end.