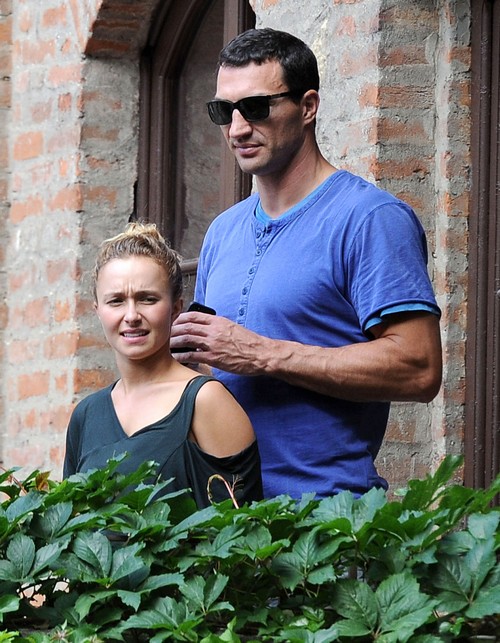 Could Hayden Panettiere have broken up her co-star Jay Hernandez‘ marriage? Well, Star Magazine is claiming that Hayden is a ‘homewrecker‘ and she had an affair with her Nashville co-star Jay Hernandez last year. While that wouldn’t be much of an issue in itself, Hayden is reportedly engaged with Wladimir Klitschko and Jay is married to Daniella Deutscher.

A source tells Star that Hayden and Jay didn’t even bother hiding their feelings during their affair, saying, “[Both Hayden and Jay] openly flaunted their feelings for each other and snuck off for alone time whenever they could. Most days, Jay would be done shooting his scenes hours before Hayden — but instead of going home, he’d wait for her and they’d leave together in her car.”

A source also adds, “Everyone knew about it. She wasn’t discreet at all.” Apparently, neither Jay nor Hayden would often kiss in public while the crew or cast was around.

So while rumors like this are a dime and dozen, I’m sure people are asking – if ‘everybody’ knew about the affair, why did it take so long for it to come out? Well, producers and people who work behind the scenes are really good at shutting down the gossip on major productions. There have been many, many A-list stars who often cheat on their spouses or significant others with their co-stars and even though everybody on that set will know, it doesn’t necessarily leak to the tabloids. Sure, they gossip and it becomes somewhat of an ‘open secret’ with people who work in the industry, but the general public would never find out. Why would any crew member risk their job by leaking rumors to the tabloids? It’s just not worth it.

What do you guys think? Could Hayden have cheated with Jay, and possibly broken up his marriage? Let us know your thoughts in the comments.