Hayden Panettiere Enagaged To Wladimir Klitschko – Marriage In Summer Of 2013 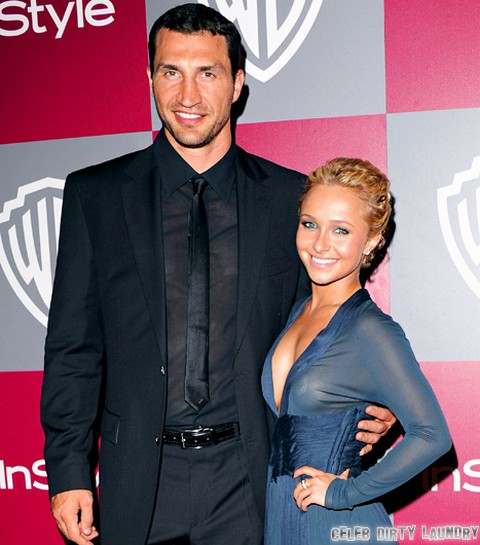 What does a former Heroes star and current Nashville and a heavyweight boxer have in common? Nothing really, but this is Hollywood, so anything is possible! Hayden Panettiere, star of the short lived sci-fi spectacle that was Heroes, is planning to marry Wladimir Klitschko, a 6-foot-6 heavyweight boxer who eerily resembles a beaten up Tony Robbins. According to a source for Us Weekly, “Very few people know, and she isn’t wearing her ring publicly yet.”

In May of 2011, the two lovebirds split after two years of heavy dating and love making. Panettiere refuses to admit that she’s dating Klitschko again, but the two have been seen out and about for the past few months. According to her, they’re “just good buddies”, but we know a secret romance when we see one. Another source revealed that the wedding will take place in the summer and that Klitschko is eager to get married to his tiny little love bird as soon as possible.

Dating a boxer isn’t weird for Panettiere, because in 2011, the little blonde star admitted that she prefers dating athletes. “They’re in similar circles, where they understand the schedule, the work ethic, [and] the social aspect, but they’re not exactly in your industry, so it works out well,” she explained.  In the past, Panettiere dated Milo Ventimiglia and Stephen Colletti, and although there were rumours of wedding bells for these past love interests, no one ever said to her, “I love you Beth Cooper!”

Marrying Klitschko would assist Panettiere in several ways. Firstly, she’d never have to fear being hit on at clubs, and secondly, she will always be able to see into the distance when standing on Klitschko’s shoulders.

It’s a win-win for both of them.

What do you think? Do you think these two are getting married? Let us know your thoughts in the comments below.