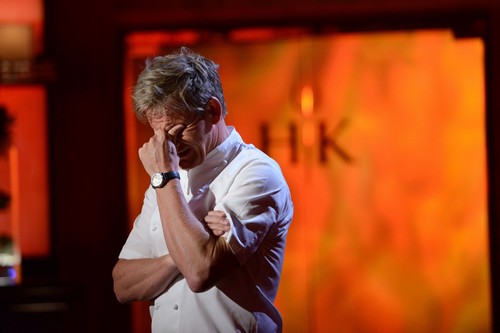 Tonight on FOX our favorite Chef Gordon Ramsey returns with a new episode of HELL’S KITCHEN called, “15 Chefs Compete” On tonight’s show Chef Ramsay challenges the contestants to create Chinese dishes.  Did you watch last week’s episode? We did and we recapped it here for you!

On last week’s episode in the continuation of a heated elimination, Chef Ramsay made an unexpected decision that changed the competition for good. Later, HELL’S KITCHEN’s maître d begged Chef Ramsay for extra help in the dining room, so he sent one chef from each team to assist the wait staff during dinner service. But when the chefs-turned-servers sent illegible tickets to the kitchen, dinner service was at a virtual standstill. After one of the most infuriating dinner services yet, Chef Ramsay asked each team to nominate two contestants to be put up for elimination.  At the end of the show the red team nominated Mary and Nedra and the blue team.  The blue team nominated Ray and Dan.  Chef Ramsey ultimately decided to take Ray and Dan jacket. He wants Nedra and Mary’s jackets too.   We will find out tonight what happens to the ladies.

On tonight’s show Chef Ramsay challenges the remaining contestants to create six stunning Chinese dishes, which will be judged by renowned chef Martin Yan. The team with the best dishes will earn a day in the sun on the paintball field, while the losing team will prepare the tedious and delicate dim sum dishes for dinner service. During dinner service, one team disappoints a VIP guest at Chefs’ Tables after dropping a lamb dish on the floor, while another chef overcooks multiple fish. With two chefs from each team up for elimination, Chef Ramsay must choose one more chef to send home for good.

Tonight’s episode is going to be another drama packed one, which you won’t want to miss. So be sure to tune in for our live coverage of FOX’s Hell Kitchen Season 11 episode 7— tonight at 8PM EST!  Find out whose dreams of winning HELL’S KITCHEN might go up in flames.

Tonight’s show opens with the continuation of last week, Chef is deciding to do something he has never done before and he sends all four back in line.  They have to earn their jacket back or they are history.  The four chefs are shocked they are still here.

Dan is totally pissed off and the other contestants thing he is acting like a baby.  It was the most intense night in Hell’s Kitchen so far.

It is a new day and the four chefs have a new chance to win their jacket back.  The chefs come down and see Chinese decorations and Chef tells them they have to make 6 stunning dishes.  They have over 200 fortune cookies and there is an ingredient in each cookie.  They have to carry the fortune cookie up to a board with chopsticks – they have 3 minutes.  Ja’nel and Jacqueline for the ladies are manning the board and Dan and Ray are manning the board for the men.  The four will put the ingredients on the board for each team.

At the end the ladies have 5 out of their 6 dishes missing ingredients.  The man got them all.

Judging their dishes will be world class chef Martin Yan.

The Blue Team win an amazing way to unwind.  The Red Team has to prepare for that night’s service.

The men leave for their reward.  They find out they are going paint balling.

The Red Team is not enjoying their punishment.  Chef Ramsay’s prepared a special delicacy for the members of the Red Team Balut eggs (Balut, a boiled duck egg with a small embryo inside, is a delicacy enjoyed all across Philippines.)

The men come back and they plan to take the Red Team back one by one.

Chef tells them he believes the teams are ready to do a good job.  The Blue Team will have a specialty celebrity guest tonight at the Chef’s table, Entourage’s  Rex Lee. The Red Team has a special guest at the chef’s table, Adam Shankman.

Nedra brings the first thing up Risotto and the Chef tells her it is so good, he gives her, her jacket back.  Mary also makes a great dish and Chef gives her back her jacket.

Susan is on chicken and she appears to be a mess.

The Blue Team/Men are rebounding on their appetizer.  Barret is happy he is on fish because he has cooked tons of fish.  I guess Barret is not as good as he think he was, he sent raw shrimp to Chef, who is not pleased.

The Red Team seems to be doing well, Susan feels like she is doing well, but she is having trouble with her lamb.  It is raw and it is taking her forever to cook.  The Chef yells at Susan to get her to move her butt.  As she takes her lamb out of the over, she drops it on the floor.

The lamb was for the VIP table.  Jessica is having problems because she is waiting for Susan to finish her lamb.

Meanwhile in the Blue Kitchen, Barret is finally ready with the VIP table’s appetizers, they are perfect.  Dan is preparing the lamb and everyone is worried.  Dan brags about how good his lamb is.

The Red Team moves on to their final ticket.  The halibut that Chef is served is raw.  The Chef asks Jessica if she is done, she tells him no.

The men are serving their last appetizer.  Barret serves up his halibut and Chef is pissed their is paper in the halibut.

The women are on their last tickets and are congratulating themselves.  The judge tells them not too!

Dinner service is complete.  The Chef declares the Red Team and Blue Team as losers.  He tells the teams to both nominate two people.

The Red Team is having trouble too decide who they are putting up.

The Blue Team want to put Barret up because of his fish.  The Blue Team wants to put Ray up too.  Some of the Blue Team disagree because they say you are suppose to put the weakest player up and they think it is Dan.  Dan is not pleased.

The Red Team nominates Jessica, because she was the driver of the fish.  The second nomination is Susan because of inconsistent time calling.

The Blue Team nominates Dan, because he is the weakest member of the Blue Team. The second nomination is Raymond because he had a lackluster performance.

The Chef sense Ray back in line because he think he ran the line tonight and he can cook.

Chef tells the remaining contestants they have a long way to go.