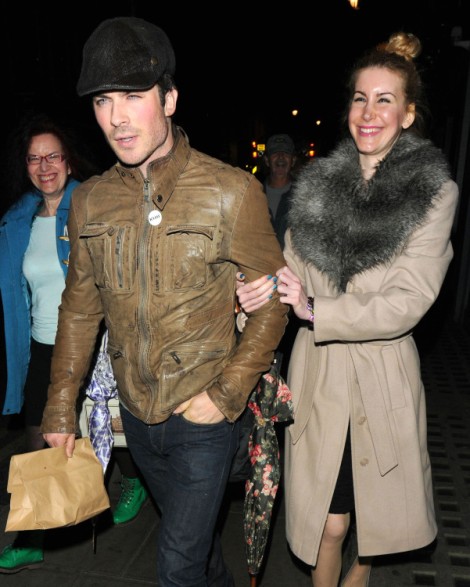 Well, it was inevitable. After the Ian Somerhalder/Nina Dobrev break up heard round the world you knew one of them would move on. I’m a little surprised Ian moved on so fast though. But let’s face it. He’s young and hot and probably wants to make his ex-girlfriend of three years, Nina Dobrev, jealous. Will it work?

This is all based on the photo agencies this morning from London. Ian Somerhalder has been there prepping for a new movie and Fameflynets reports he was out at Groucho club last night and left in the arms of a woman (see below). I won’t lie, I don’t know much about Ian but that chick doesn’t much seem like his type. Just Jared has the same photos and writes Ian had dinner with his dad last night. Could this chick have been a family member? The only thing that makes me think so is the older woman in the background watching everything go down. She looks like she’s with them, right? So I’m not quite sure if this is the in-your-face/I’m screwing someone else already/I’ve moved on faster than you shout out the photo agencies want it to be.  I could be wrong though. I know there are A LOT of Ian/Nina fanatics out there who know boatloads more than I do on this subject. Is the chick in the picture his sister or something?

I usually don’t feel one way or the other towards Ian. He’s too pretty! But I’m digging the ensemble here. He’s throwing off some major Dylan McDermott vibes and I’m liking it. Usually he just walks around trying to screw everyone with his eyes and its creepiness turns me off. Maybe he stopped trying so hard once he realized he wasn’t going to get Fifty Shades? Has he come to that realization yet?