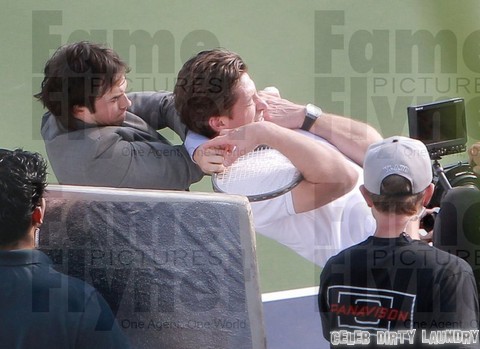 It sounds like Ian Somerhalder’s week started off on the wrong foot. On Monday night the actor’s car was broken into and his ipod, among other things was stolen. Ian himself addressed the robbery on his Twitter, posting a photo of the smashed window on his car and commenting,

“Times are tough I know-but whoever smashed my window last night&stole my iPod-you’re in Luck;I just put some great new music on it!You’re a d**k Fyi (for your information).”

Here’s the thing, on that ipod is rumored to be a bunch of photos of Ian and main squeeze, Nina Dobrev.  You know, the kind of stuff that is intended to be private and not meant for public consumption?  At this point, the actor is left praying that the thief doesn’t realize whose car it was and that any incriminating photos would likely be worth a bit of cash if placed in the right (or wrong) hands.

In the meantime, there’s no word on whether or not the actor has reunited yet with Nina. The two were rumored to have taken a break from each other as he traveled to Austin for SXSW and she spent time with family and her girlfriends. Nina did pop up over the weekend with Julianne Hough. She’s obviously helping her pal through a tough break up. I guess the real question is whether or not Nina was going through one as well.  I’m pretty sure she and Ian have been in touch after his ipod was swiped.  Maybe that situation reunited the couple  because if anything serious does leak to the press, they better be on the same page!

Would you like to see some racy photos of Nina and Ian hit the internet?  Tell us your thoughts in the comments below!