CDL Exclusive: Ice Dancers Lynn Kriengkrairut and Logan Giulietti-Schmitt Are Aiming for a Medal at the US National Championships 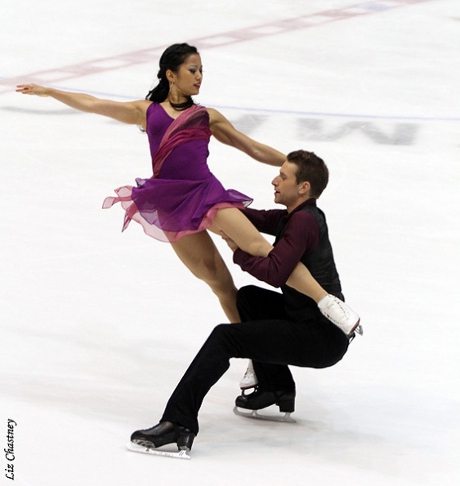 The US National’s Figure Skating Championships are set to take place in Omaha, Nebraska in two short weeks and all of the most elite athletes in the sport are well-trained and ready to do battle.  2012 has proven to be the biggest year as of yet for the American ice dance team of  Lynn Kriengkrairut and Logan Giulietti-Schmitt as they kicked off the year by claiming the pewter medal at the last National Championships.

They are currently burning their way through this new season with fabulous programs. A win at The Ice Challenge in November helped to bolster the duo’s growing confidence.  They are gaining momentum, respect, and a ton of praise as they set their sights on medal improvement in Omaha as well as a much-coveted spot on the World Team.  Lynn and Logan’s training under Yasa Nechaeva and Yuri Chesnichenko has progressed as their artistry continues to flourish in an equally balanced way.  The duo recently spoke exclusively with meabout training, their goals, and, perhaps most importantly, their deep appreciation of the fans who support them.

CM: How has your training been for this season?

LGS: We’re still in Ann Arbor, Michigan where we’ve been for six years now.  We have a 45 minute warm up every day and then skate for about three hours a day total. Then there’s another hour of either ballet or ballroom and two days a week we work out for another hour. We also skate for about two hours on Sunday and we do off-ice training as well. I coach about 25 hours a week and I’m also the Director of the Learn To Skate program at the Ann Arbor Skating Club. Meanwhile Lynn goes to school in between our training so we’re both really busy every day.

CM:  What are your goals for this new season?

LK:  Our ultimate goal for both this and last season is to be on the podium and to then make it onto the world team. I think that’s still our most prominent goal for this season. We’re taking each competition as a way to warm-up for National’s.  We chose these pieces of music for our programs because we thought that they’d be really good crowd pleasers for the American audience. We’ve been working on the energy that’s involved to really play it up and get the crowd involved.  We’re skating in three internationals this year with the idea that all the while we’re really building for Nationals.

LGS:  We also started to take a different approach to our skating by trying to be more involved in some of the nuances of the programs and in our connection. We’re not worrying as much about what the competitors are doing or what other people are saying about our skating.  We’re really trusting in our skating and in the path that we’re trying to take with our character and expression.  We really like where our style has gone and we’re trying to play that up while keeping it fresh. We still have a lot of variance from one program to another this year and we love our programs so much.  The short dance is very fun and upbeat and then our free-dance is very passionate and romantic. It shows a great spectrum of our character and style.

CM:  Do you consider yourselves an equally balanced team or is one of you more artistic while the other is the technician?

LK:  I think we skate off of each other very well and I think that we pick up on things that the other person does and then kind of react to it.

LGS:  I think that we’re both well-balanced and then that makes us a well-balanced team.  When it comes to certain things they may come a little easier for one than the other and that’s one of the reasons that we’ve worked so hard on enhancing that connection. It kind of helps to bridge and keep us together and balanced.  I think it shows in our skating because it’s easy to tell when one individual is much stronger than another, so it’s good that we are so balanced.  Our coaches have done a really great job of pulling things out of us that maybe aren’t in the forefront, like our choreography.

CM:  Who are some of the skaters that have influenced the both of you the most?

LK:  When I was younger I really looked up to Michelle Kwan and Sasha Cohen.  Michelle Kwan is just such an inspirational person in general with her work ethic. She’s such a good role model.  Sasha Cohen with her grace and flexibility — I always wanted to skate like her.  Also Naomi Lang and Peter Tchernyshev for dance. They had the chemistry that I love. I look back on them now and really appreciate what they did.

LGS:  When I was young I looked up to Kurt Browning because he was such a solid skater and a real performer. His charisma on the ice was incredible.  I also really liked Elvis Stojko. He was quite a bit different for his time. His style and masculinity was unique and nothing like any of the other skaters of the 90’s and I appreciate that.  Also, Lang and Tchernyshev were incredible skaters not only competitively, but their show skating was just incredible. They were truly the most balanced skaters around. Also I liked the Dushenays of the late 80’s.  I recently looked back on their performances and they were just so creative and different for their time.

CM:  When you guys aren’t on the ice or working in one way or another, what do you like to do?

LK:  Sleep and eat (laughing)!  We both like to cook, bake pies.  I like to play golf in the summer.

LGS:  I’m not so much the baker!  In the off-season I mountain bike a little bit and play a little volleyball. I’ve really gotten into that over the last few years and really enjoy it. During the skating season it’s really hard to find the time to do any of that though (laughing).

CM:  Tell me something that would surprise your fans.

LK:  We’re not dating!  We wear the same colors on the same days, it’s weird, but we’re not a couple!

LGS:  We sometimes do wear the same shirts (laughing)!

CM: What would you like to say to the people that support you in your skating?

LK:  Thank you for being supportive. I know that a lot of the committed fans will buy tickets ahead of time and know exactly who they want to see and where. They donate time and also some help to fund the skaters and it all means a lot to us. Skating is so much fun for us but at the same time it’s a big financial burden unfortunately. Having that support there even when times get a little rough, it means everything. Not just in competitions but even the emails or little notes, they really matter to us and keep us motivated.

LGS:  without our fans we wouldn’t be able to do what we love. Having people to support and watch us  means a lot and if we can give back to them through our art and sport, then it makes it so much more meaningful. It really helps us to carry on Lynn and I really do try to make a personal connection with the fans that take the time to reach out to us. It is special and it has a great amount of meaning to us so we don’t want people to hesitate to send us even a few lines.

LK:  Each message is special to us and received by us.

LGS: We’ve received cards that I’ve made copies of for both Lynn and I so that we can carry them with us. The sentiment was so amazing and  it makes all the difference on a tough training day. We’re so grateful for that kind of out pouring and it keeps us going!

Lynn and Logan are scheduled to grace the ice at US Nationals on January 25th for the short dance and then they will perform their free dance on January 26th.  We at CDL wish them the best of luck in their quest for a spot on the podium again this year!