January Jones Trys To Hook Up With Orlando Bloom But He Rejects Her! (PHOTOS) 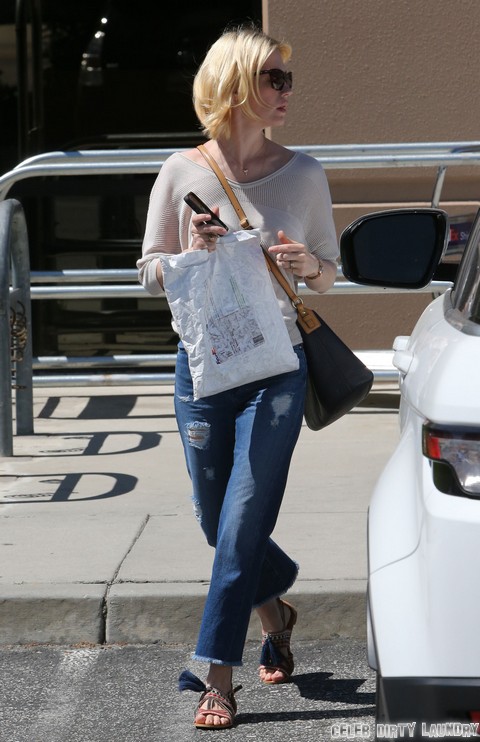 This story made me smile. It has been said that 35-year old Mad Men star January Jones gets whatever she wants. Especially when it comes to men. She rarely seems interested in forging a real relationship of any kind, January seems very happy to be known as Hollywood’s most consistent side piece. She reminds me of that old Sex And The City episode where Carrie Bradshaw pondered having sex like a man. Pick your target, get it and get out. It seems to be an MO that January lives by.

January turned up in Santa Monica, CA on April 10th to celebrate the Coach Evening of Cocktails and she set her sights on the very married Orlando Bloom. According to the April 29th print edition of Star, she moved in on the hottie with great ease, expecting to get her way because (in her mind) no one will ever reject January. She interrupted the conversation that Orlando was knee deep in and instead of stopping mid-sentence to flirt with the blonde star, Orlando made it very clear that he wasn’t interested in anything that January was offering.

Girlfriend got out of their quick and drowned herself in a few more drinks before finding the now drunken nerve to hit on her runner-up target. Do you think that she cares that anyone in Hollywood that has a shred of decency – there have to be a few of those, right? – think badly of her? I mean, eventually even the chronic side dish would rather be a main course and I’m sure even January feels that on the rare occasion when she is rejected.

I think for the most part she is commitment phobic though. Why else would she only be interested in toying with attached men? She knows they can’t demand much from her and the whole thing must give her a sense of power. You know, not only does she swipe someone’s man for 15 minutes but then she could ruin his life too if she decided to tell the truth! I’m impressed that Orlando blew her off, are you? Tell us your thoughts in the comments below!