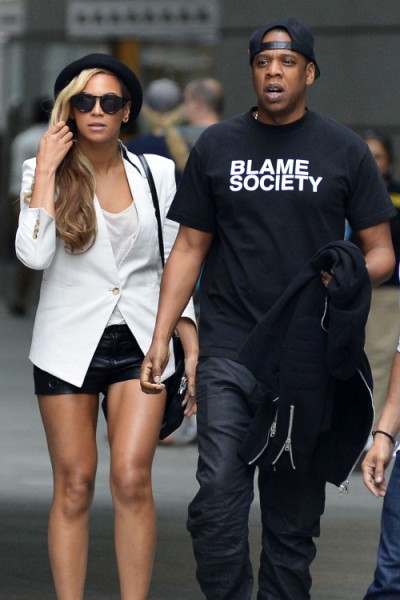 I don’t know why I love this story so much. It just makes me laugh every time. I think it’s because it shows that Jay-Z isn’t as bad ass and in control as he wants everyone to believe. He’s not in charge of everything. He’s not the biggest dude in the room at all times. Even Jay-Z gets slapped back down from time to time. The fact that the slapping came from Robert De Niro and Jay-Z’s still bitching about it only makes it that much better.

I’m sure you remember the story. At Leonardo DiCaprio’s birthday party last year, De Niro got shitty with Jay in front of everyone over the fact that Jay wasn’t returning his phone calls. De Niro basically said Jay wasn’t a man and was acting like  a little bitch. Word got out and it was the talk of the party.

And, by his latest interview while filming a music video at the Pace Gallery, Jay-Z still isn’t over it. When asked about the altercation and if they’d made up Jay replied: “Who? No, no I haven’t. I treat people based on who they are… who they really are. Not the name, not Robert De Niro. It doesn’t matter who you are, everyone has to be respectful and everyone has to be a human being.”

First of all, did he just “Who?” a Robert De Niro question? That’s chicken shit right there. But what is he trying to say? De Niro doesn’t deserve respect? De Niro’s a crotchity asshole who should be ignored? De Niro doesn’t act like a human being? Obviously I don’t know the specifics of that night but since when is calling someone out for shitty behavior a less than human act? You didn’t return his calls. You didn’t record a song for the Tribeca Film Festival like he suggested and he embarrassed you in front of a bunch of people for it. That sounds human enough for me. And, at his age, you take it. That’s how the world works. It has nothing to do with who he is – OK maybe a little bit. But when an older person shames you for your behavior you take it. Case closed. You don’t bitch back. And you certainly don’t make snide comments six months later. Didn’t his mother teach him anything??