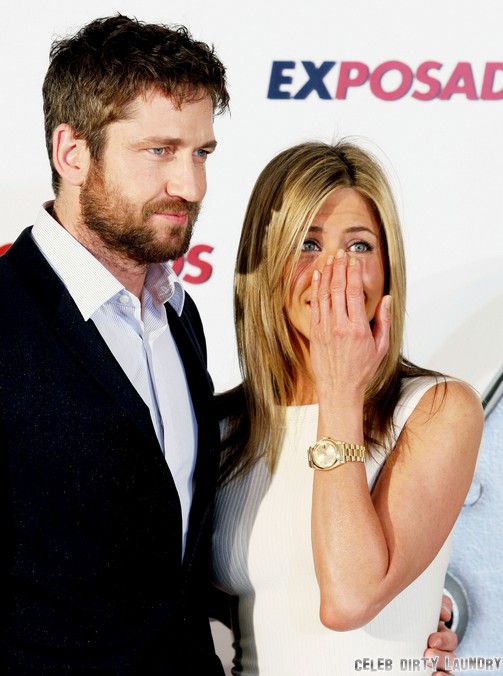 When Jennifer Aniston and Justin Theroux first announced their engagement, I think everyone assumed that it was a by-product of trying to slip one by Brad Pitt and Angelina Jolie. Of course, Aniston insisted that it was the ‘right’ time and that Justin was ‘the one’. If that was the case, I ask you – why haven’t they gotten married yet?

Well, according to Star Magazine, Jennifer and Justin have now decided to call off the wedding [what is it, the 8th time?] because they got into a ‘nasty fight’ at the Soho House this past weekend.

A witness reportedly told the magazine, ‘Aniston immediately lit up’ when ex-boyfriend Gerard Butler approached their table, which supposedly made Justin mad. The source explains, “Justin was furious. He called Jen selfish and said he’d felt like a third wheel while she flirted with Gerard all night. Jen broke down in tears. When they left, she had mascara running down her face.”

Ok, first of all – no one in their right mind would get jealous of Gerard Butler. I mean, it’s Gerard Butler. Come on! Secondly, jealousy has no place in a business arrangement. Yes, ok ok, Jennifer and Justin are in luuuurveee, but please – it’s also good for their careers. Thirdly, both Justin and Jennifer are friends with Gerard so I highly doubt Jennifer ‘flirted’ with him all night while Justin sat as the ‘third wheel’.

Also, if Jennifer really had mascara running down her face when she left, I can guarantee that someone would have gotten a picture of it. Now, I have my doubts about whether this wedding will ever happen, but I hardly think Jennifer and Justin would break it off for such trivial reasons. Whatever else you want to call them, they’re more professional than that.