Jennifer Aniston and Justin Theroux Party in Cabo with Courteney Cox and their Famous Friends! (PHOTOS) 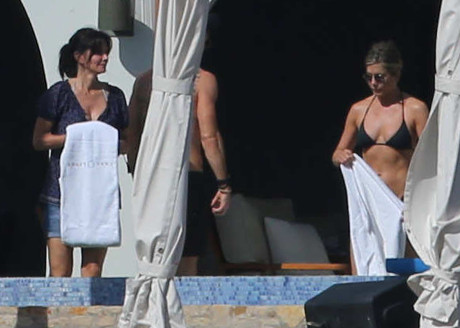 Jennifer Aniston and Justin Theroux were photographed partying in Cabo over the holidays with some of their very famous celeb friends, including Courteney Cox, Howard Stern, Beth Ostrosky, Jimmy Kimmel, and Molly McNearney. Justin and Jen usually fly south during the holidays and this time they chose to bring along some of their pals — to make it a true party!

Aniston was spotted beside her longtime friend Courteney Cox. While they were bikini ready, Justin Theroux opted for cutoff shorts and a belt because he can’t ever dress down, not even at the beach. Needless to say, everyone looked very classy as they soaked up the much deserved rays after a long year.

Jennifer and Justin suffered some rather intense break up rumors this past year and, despite the alleged raucous surrounding their relationship, the couple appeared to be in happy, healthy, and upbeat spirits. What do you think about the state of Jen and Justin’s relationship? The constant news of their impending destruction is beginning to seem irrelevant, as the couple always appears to be doing just fine — especially when they’re photographed on vacay together.

Check out the gallery below of Jen and her fancy friends doing their holiday time in style. If you had the chance to vacation with any one of your fave celebs, who would you choose? Let us know in the comments section below!