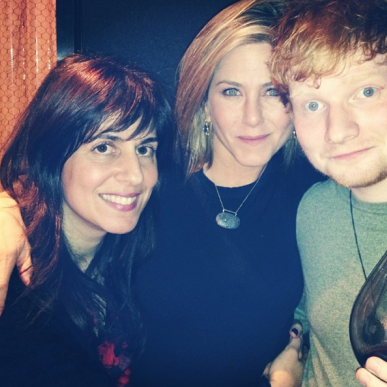 Are Jennifer Aniston and Justin Theroux over and done with? The couple apparently spent Thanksgiving apart. After being together for so long, going separate ways for a holiday that celebrates friends and family doesn’t really seem to convey a picture-perfect relationship. And you’ll never guess who Jennifer was photographed beside on Thankgsiving day; let’s just say it was a far cry away from Justin Theroux.

Jennifer Aniston’s manager, Aleen Keshishian, posted a photograph on her Instagram account featuring herself beside Jen and Ed Sheeran, who seems to have a new famous friend each week. Alongside the photo, Keshishian wrote, “#happythanksgiving #jenniferaniston @aleenkeshishian #edsheeran.”

It’s a bit unclear how Jen and Ed know each other, but some are speculating that it’s through Ed’s connection with Courteney Cox, Jen’s former Friends co-star, that the two have found their ways into each others photos.

But the real question is not how Ed Sheeran and Jen know each other but WHY IN THE WORLD she wasn’t taking pictures with Justin Theroux, the man to whom she’s engaged to marry. Does this mean the engagement is off; are these two finally ready to part ways for good? Here’s the thing . . . . The couple is currently living apart, so their time together is slim as it is. Justin’s currently living in NYC, where he’s supposedly “working,” and Jen is filming Horrible Bosses 2 in L.A.

Many people are speculating that the engagement, and future marriage, between these two celebs is off; however, Jen’s love life is about as predictable as the weather, so I suppose we’ll just have to wait things out until more news develops. Do you think Jennifer Aniston and Ed Sheeran are crushing on each other in secret?