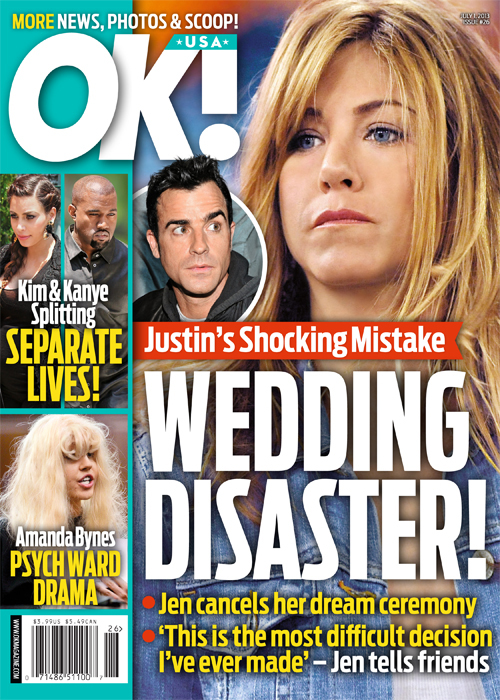 The new OK Magazine cover has just landed and, my oh my, does it have some potentially devastating reports. Taking the cover story is Jennifer Aniston in what appears to be some unfortunate news. The magazine claims that Jennifer Aniston and Justin Theroux‘s wedding has been cancelled in light of a HUGE mistake made by Justin. “Justin’s shocking mistake,” reads the magazine, “Wedding disaster! Jen cancels her dream ceremony. ‘This is the most difficult decision I’ve ever made,’ she tells friends.”

Wow, what unfortunate news — if it is true. All Jen wants to do is get married to her true love and she can’t ever seem to catch a break, can she? The tabloids of course play off of joyous events, trying to twist them around into tragedies, but it wouldn’t be the first time Jen’s love life suffered a tragedy. To get more on this story, make sure to get your copy soon!

In other news, the magazine cover reports that Kim Kardashian and Kanye west “are leading separate lives” and that they’re “splitting.” Here’s another example of a story *possibly* spun out of control. I mean, I don’t think it’s much of a secret that they lead different lives, and that each of those lives are oftentimes taken up by work and, therefore, the two aren’t right beside each other 24/7. But who knows . . . . there is an abundance of reports out there that align with this magazine’s reports.

I really don’t believe that Kimye is breaking up. Yet. The verdict’s still out on whether or not they’ll be together 4 life, but right now I think their baby will bring them together. Unless of course that just causes more drama between them. After all, Kanye is really distraught over the Kardashian’s game plan for publicizing the baby.