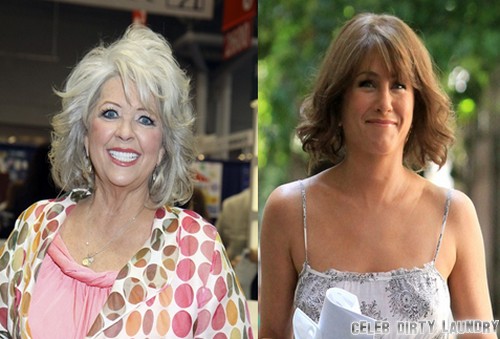 Great news! Jennifer Aniston finally has a reason to be known outside of her lame movies, and Brangelina Gate.

Mike Walker from the National Enquirer said Jennifer Aniston was walking her wide bellied, but not pregnant muffins around a Beverly Hills Whole Foods Market. A fat lady wearing a flower dress was star stricken by the ‘forever fiancé’.

Just when Jen gave her that fake GTFOH smile, the lady yelled, “You know? You’d make a wonderful Paula Deen! And you know someone’s going to make a movie about her troubles, so you should jump on that before somebody beats you to it.”

Don’t laugh, there’s nothing funny. Jen’s face got cracked just like Alec Baldwin cracked another paparazzi for forking with him. She was humiliated, but managed to say, “Really? You think I look like Paula Deen?”

The Friends fanatic responded, “Well of course you’re younger, so they’ll use make-up to age you. But there’s definitely a resemblance. I believe you could pull it off!”

Now before you start making judgments, and assuming Justin Theroux is stalling the wedding because of the unflattering 17 pounds the childless hottie has gained, this grocery shopper may have a point. All of Jennifer’s movies tend to be her playing the exact same character. Fans are unexcited, and she obviously paid for her star on the Hollywood Walk of Fame. Since her break out role on Friends, we’ve suffered through trash movie after trash movie. Aniston is surviving Hollywood off the Friends franchise (just like the only reason NSync was invited to the VMA awards was because of Justin Timberlake). We won’t even mention how she scarified her personal life for her career.

Aniston should certainly risk her good girl image for more challenging roles. Paula Deen may be a rich turkey neck racist, but at least Aniston has the rich and turkey neck part already.

What do you think? Will Jennifer Aniston ever garner the respect of Meryl Streep, and Angelina Jolie, at this ‘We are The Millers’ pace? Should Aniston actually consider starring as Paula Deen?