Jennifer Aniston Says No To A Prenup – Why Is She Risking $150 Million Fortune? 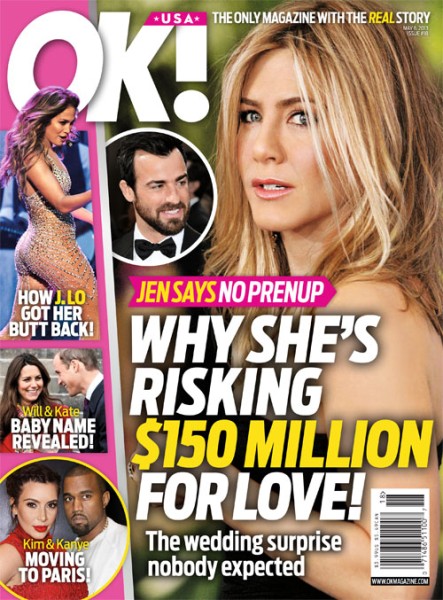 I don’t want to believe this. It’s not that I like Jennifer Aniston or have an overwhelming faith in her smart decision making (she did star in The Bounty Hunter after all) but I find it hard to believe anyone could be this stupid. Would Jen put her $150 million fortune on the line for love? Has it made her that blind?

You’d think one failed marriage would make her wary of these kinds of statements but not so says this week’s OK! magazine cover! She’s going forward with her marriage to Justin Theroux with no prenup. Jennifer Aniston must think she’s got a keeper or she must not think she’s going to get married anyway. My money’s on the latter….

And is Kim Kardashian moving to Paris? The magazine reports that Kim and Kanye West are moving forward with plans to set up shop in Paris before the baby is born. There have been all kinds of rumors floating around that Kim even found a baby doctor she liked there last time she was in town. Sure the paparazzi laws are stricter there but I can’t see it happening long-term. Kim without paparazzi hounding her is like a Japanese Kamikaze pilot wearing a crash helmet – it makes no sense.

And apparently Jennifer Lopez’s ass was missing. Where did it go? I’m pretty sure she’s had it all along though sometimes it gets eclipsed by Kim Kardashian’s. This must be a story on lunges or something equally painful. Too bad she can’t ditch Casper Smart and get both her ass and her dignity back. Is that too much goodness in one year?

Why do you think Jennifer Aniston would say no to a prenup? You’d think at her age being in love wouldn’t make you that dumb but there’s a 13-year-old girl in all of us I suppose.