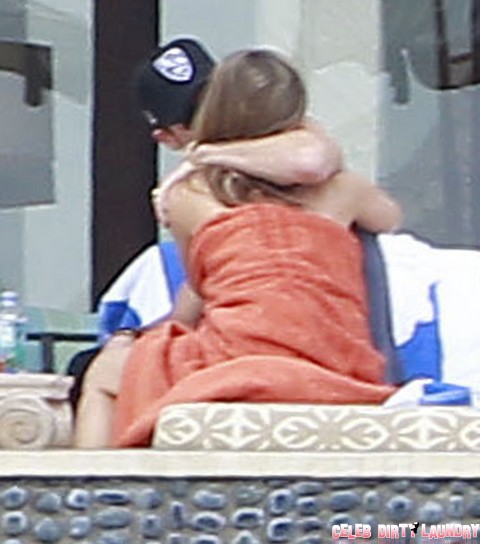 Jennifer Aniston has been on baby watch since before the last episode of Friends in 2004, but we haven’t seen a bulge! We reported that she was hiding a bump under a baggy coat before Christmas while shopping with fiance Justin Theroux, but vacation photos showed the actress looking as trim and tone as ever! We’re starting to think she may be wholly infertile, but that depressing thought doesn’t make her turn to the cookies and non fat milk. The bride-to-be explained her new lifestyle diet plan.

“I used to think that anything packaged as low-fat was good for me,” the face of Smart Water admitted. It’s a common mistake: we trade out fatty calories that are rich in minerals, vitamins, and other essentials like fiber and protein for empty calories that are numerically better because they are low-fat. “I stopped dieting when I figured out that you just have to eat regularly and properly within moderation.” She now focuses on whole foods like, salmon, quinoa, and Greek-strained yogurt. Considering that her wedding is quickly approaching (it has to be, if she’s going to beat Brad Pitt and Angelina Jolie to the altar, right?), a healthy reboot is just what she needs!

But that doesn’t mean Jen is a whole-foods model of natural beauty. In fact, she’s had more plastic surgery than most women her age in Hollywood! Although she won’t admit to anything, anyone with eyes will recognize breast augmentation (she needs a tune up!), botox, and at least two nose jobs! I wouldn’t be surprised if she scheduled a little tummy tuck in between all those procedures, but that’s not to say she doesn’t have killer abs! I guess the real trick to a Hollywood body is whole foods, exercise, and a good surgeon! Do you think Jennifer’s full-fat diet is healthy, or effective? Or does she just stuff her face and then have it all sucked out?