John Travolta and Kelly Preston Separate: Move To Different Homes As She Files For Divorce – Report 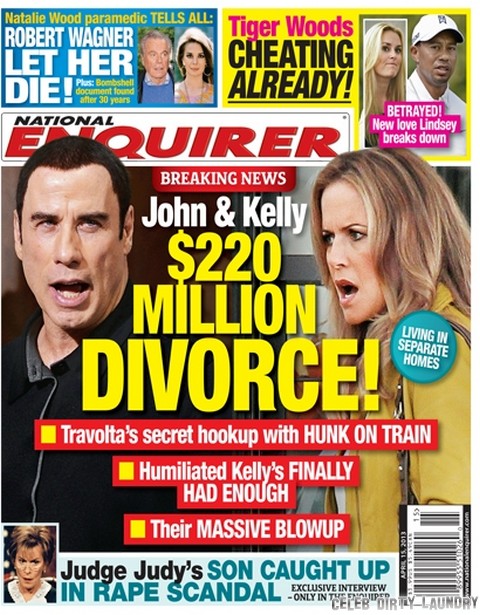 Could it be that Kelly Preston is finally ready to find herself a backbone and a sense of pride and put an end to her sham of a marriage? After years of watching husband, John Travolta chase after masseuses and any other hot available men it seems like she has been humiliated enough and is ready to file for divorce. According to the April 15th print edition of The National Enquirer Kelly learned of John getting busy with a hunky guy during a train ride and that was it. It was the hump that broke the proverbial camel’s back. The couple had a huge blowout that has left them not just leading separate lives, but living in different homes as well.

Also in Enquirer you can get the latest news on Lindsey Vonn and Tiger Woods.  The two recently admitted that they are dating, as Tiger tried to sell his story of being a changed man. He claimed that he was honest with Lindsey about everything and that she truly understands him. Perhaps it’s because they are cut from the same cloth. As they dated each other Tiger was also trying to convince ex-wife, Elin Nordegren to take him back and Lindsay was supposedly dating Kris Humphries on the DL. The couple supposedly talked it all out and things were good for a few weeks. Now it seems Lindsay has found out about Tiger’s latest side dish and all bets are off.

We all know that Natalie Wood drowned tragically 30 years ago but the situation surrounding that accident has always raised eyebrows. She was rumored to have fought with Robert Wagner shortly before her death and The National Enquirer has an update on the case that even after all of these years still has a multitude of unanswered questions. Grab yourself the new issue so you can read the latest on these stories and many more.