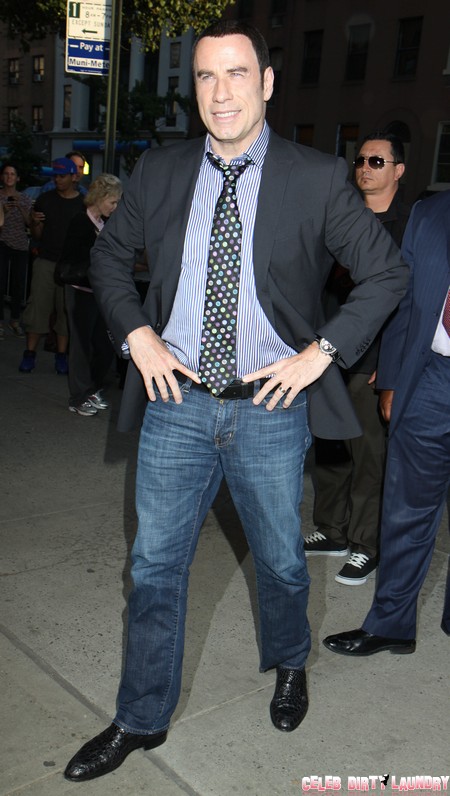 Either Kelly Preston is the most long-suffering wife in Hollywood, or else for the last 23 years she has had some hefty secrets of her own that were masked by her marriage to John Travolta. Either way, it looks like things have totally imploded between the couple and that $220 million divorce battle is about to proceed full speed ahead. John has been plagued by accusations of sexual battery by more than one masseuse and of course he has adamantly denied any wrong doing. He also denied having a gay sexual relationship for seven years with his former pilot.

Kelly has stood by her man through mountains of bull shit but the latest situation for some reason seems to be the proverbial straw to break the camel’s back. According to the April 29th print edition of National Enquirer John has gotten extremely close to L.A. Based photographer, Todd Dwayne Holly, who is said to be little more than a glorified obsessed fan of the actor. Apparently Holly shot John’s Grease take-off video last year and the two bonded over personal issues. They both lost a son and understood each others’ pain. The fact that Holly’s studio is covered in photos of John doesn’t seem to creep him out. Instead he was happy to take a 28 hour train ride with Holly and the two men were caught in a compromising position.

Kelly caught wind of their dalliance and lost her mind. She is also said to be fed up with John’s insistence that she be a stay-at-home mom. Kelly misses acting and no doubt her career was a nifty diversion from thinking about her lying, cheating husband! After getting caught this time Kelly has insisted that the divorce will happen if major changes aren’t made. Of course John thinks it’ll all blow over but Kelly is telling friends not this time.

Should Kelly pull the plug on her marriage once and for all? Tell us your thoughts in the comments below!