Jonathan Jaxson: ‘Don’t You Know Who I Am Yet’ Hollywood Tell-All Will Shock You! – CDL Exclusive 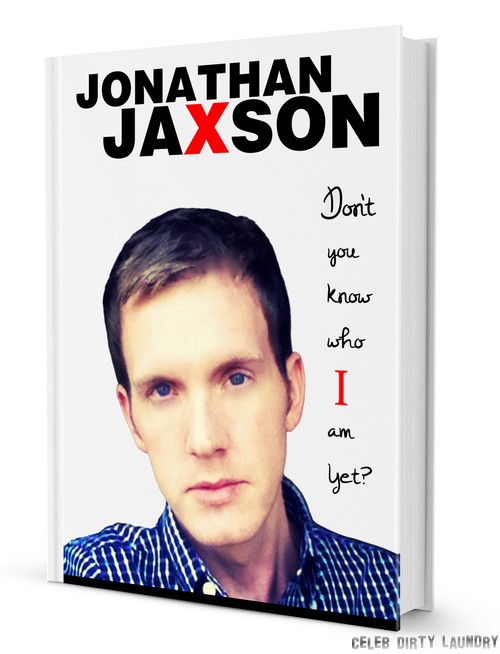 Jonathan Jaxson may not be a name that you’re familiar with just yet, but I’m pretty sure that in a few weeks you’ll be hearing a lot about him. His life began with a bumpy start and he at first used his troubled teenaged past as a way to frequent the talk show circuit discussing the issues that plagued him. Jonathan quickly grew to love the whole reality television junket and decided to channel that into a career in Hollywood. He paid his dues and started to build a name for himself as a publicist.

Ironically, Jonathan eventually found himself representing a bunch of young reality TV stars that needed some extra help in extending their time in the spotlight. It’s a job that he loves and in the cut throat PR world, Jonathan knows how to get it all done using whatever means it takes. The thing is, that need for attention and adulation never really goes away and so while Jon has helped numerous others reach their ultimate popularity, he came to realize that he also has quite a story of his own to tell.

Here are some excerpts from the book in which we exclusively got our hands on:

Using some of my TV connections and the behind-the-scenes things I had learned from my Reality TV experiences, I was able to create a successful company providing PR to local celebrities and many in Hollywood. That morphed into a very popular gossip blog and countless TV appearances locally and nationally to talk about the lead story of the day and give my input. I started to realize that the setups and dramatic situations that I was encouraged to create for TV were the exact things that would help my clients get publicity. My experience taught me what did and didn’t work so I decided to help make these people famous with every trick in the book.

​All of this was surprisingly successful. Magazines, newspapers, and media outlets gobbled up anything I could feed them. They were insatiable and I was doing my best to feed the beast. I would try to think up a good story that would get an up-and-coming reality star some much-needed attention so that she could negotiate her next contract. No matter how outlandish the story, no one ever questioned them. They just ran with it. That cycle of creating the news, feeding it to the media anonymously, and then being asked to comment on it was exhausting to say the least. I could barely keep track of which story I had been a part of and what was true, but that became easier since almost none of it was real. It was all make-believe.

​In this business, it’s all about the exposure you can get and it doesn’t matter how you do it. Believe it or not, it’s an art that many never master. It has to be the right kind of story for the celebrity. Basically, it’s all about image. A woman who is going for a bad girl role or basically a shit-stirrer obviously wants to be a part of a scandalous type of story, maybe breaking up a marriage or causing a fight with someone. Sometimes it’s a fine line because the public can turn on a star quickly if the story is not told the way it was planned. Often it’s more about giving bits and pieces and letting the reader or viewer fill in the details.

Fashion Week Is Not for the Meek:

I was backstage at the Heatherette show as part of the annual New York Fashion Week. I had clients in their seats awaiting the arrival of Britney Spears. This was during her very public breakdown, and Britney did finally show up. Late. I watched her get out of chauffeured car, obviously incoherent, where she proceeded to throw up all over herself and the sidewalk below. Her team quickly pulled her back in the car and sped off.

Later that night I accompanied several of my clients to the ultra-exclusive celebrity club Bungalow 8. As we took over the top floor balcony overlooking the dance floor, with full bottle service and anything we needed at our fingertips, I watched some sad and unimaginable antics by a very famous pair of twins. Next, I was on my way out of the party and was saying good-bye to some clients who moved to sit beside a charming, Oscar winning actor who I didn’t really know much about.

At his booth was a gaggle full of young women, but as I got up to leave and give him a hug, he quickly turned his head and had his lips on mine and we kissed with our mouths open before I was shocked and finally said my official good night. I did an online search at home and found out he was still married with children. I was so shocked that he would make out with me of all people….

Jonathan has appeared in numerous magazines and on several national TV shows such as; The Today Show, Extra, The Insider, Dr. Drew, Issues with Jane Velez-Mitchell, CNN, Entertainment Tonight and Inside Edition. He has worked closely with bona fide stars and serious train wrecks that will do literally anything for another minute in the limelight. Now it’s his turn to speak of his adventures and experiences and you know you’ll want to read it! We all love the behind-the-scenes glimpse at what makes people tick and how they really behave once the camera stops rolling. That’s exactly what Jonathan is now bringing to table and there’s no doubt that readers will want to devour every chapter!

Don’t You Know Who I Am Yet? Is Jonathan’s tell-all memoir and it’s set to dropon June 4th. Keep an eye out and grab yourself a copy because from the glimpse that I’ve already had, you’re not going to want to miss this!

You can pre-order yours today on the official website at:

www.dontyouknowwhoiamyet.com where Jonathan tells us that 50% of the proceeds will go directly to the Red Cross of Oklahoma.