Jordan Graham Pushed Cody Johnson Off A Cliff To His Death: Murdered New Husband In A Glacier 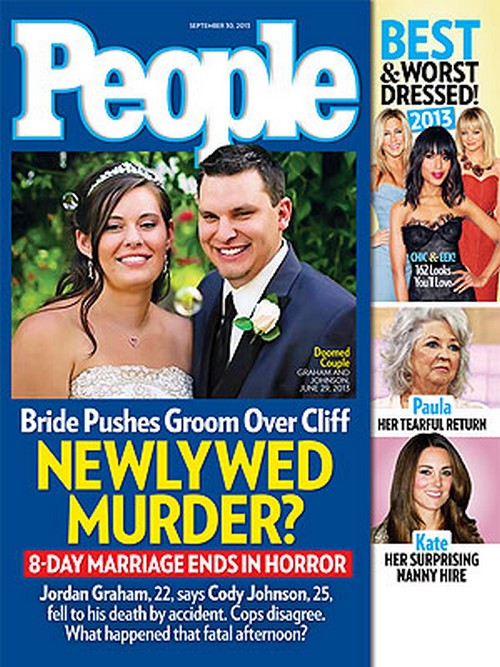 The death of 25-year old Cody Johnson may serve as a cautionary tale of sorts to anyone that has a gut feeling that things in their relationship aren’t quite right. Two years ago he was introduced to Jordan Graham, a young day care worker and he seemed to believe that he had met his love match. According to the Sept. 30th print edition of People those close to the couple thought that there were some red flags and by the time Cody proposed friends believed that he was making a mistake.

Jordan’s interests seemed to be elsewhere in spite of accepting the proposal and going through with the June 29, 2013 wedding. Eight days later Cody was missing in Glacier National Park, a disappearance that eventually was explained by Jordan once she started getting her lies twisted. Now according to her she and Cody had a fight and she pushed him off a cliff to his death in the park. Jordan claims that while she pushed him in anger, she never meant to kill him and she was freed pending Grand Jury charges on Sept. 9th.

Sources close to the couple believe that Jordan was in love with the idea of being a wife a whole lot more than she actually wanted to be Cody’s wife and that it didn’t take much to set her off in the end. Did Jordan really want her husband dead? Friends say there are red flags all over the place and they still don’t believe that she’s telling the whole truth about what happened in Glacier National Park. Do you think that she is still leaving out important details that might lead to more ominous charges? Tell us your thoughts in the comments below!