Josh Hutcherson Says He’s Gay: Waiting To Meet the Right Guy to Come Out As Bisexual? 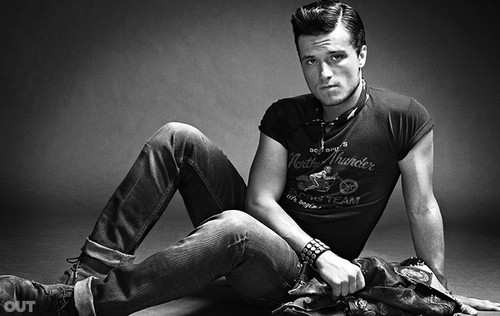 The Hunger Games cutie Josh Hutcherson gave an uninhibited interview to Shana Naomi Krochmal of Out Magazine where he talked about his sexuality.   Without much prompting Josh volunteered, “I would probably list myself as mostly straight.”  hmm, does that translate into a little gay?

Josh went on to reveal that he has never really wanted to kiss a man but he has found them attractive.  Josh is secure in his sexuality and he doesn’t want it to be put in a box – one way or another.  He is still young and open to new experiences.  He went on to say, “Maybe I could say right now I’m 100% straight.  But who knows? In a fucking year, I could meet a guy and be like, Whoa, I’m attracted to this person.”  So Josh is not ruling out a gay relationship.

Josh is also a huge supporter of gay rights and the LGBT community.  Josh is the founder of Straight But Not Narrow, a youth organization that speaks out about homophobia.  Josh does not understand people’s attitude about gay people and said, “Sometimes it’s frustrating to comprehend how people are not OK with it. If you can try to tell me how it’s hurting you, you’re crazy. You’re absolutely crazy. Like, what do you mean it’s not natural? Even if—even if, which, I disagree, but even if—why the fuck do you care?”

Josh can next be seen reprising his role as Peeta Mellark  in the next installment of the Hunger Games: Catching Fire, which will hit theatres in November 22nd, 2013.