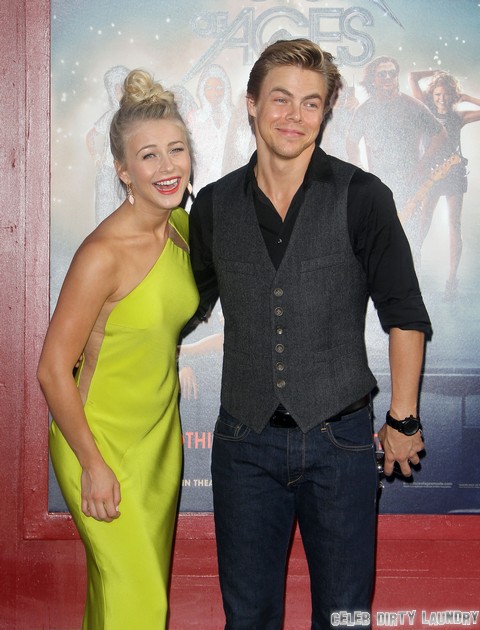 If you are a fan of real competitive ballroom dancing, I’m talking about the cut throat sport and not the happy mirror ball competition that ABC throws each year, then you’ll be super excited to hear about Julianne and Derek Hough’s new project. They brother and sister are set to choreograph and executive produce Blackpool, a new drama for the cable channel Starz.

The series itself will be a bit controversial and focus on the prestigious ballroom competition that takes place each year in Blackpool, England.  According to Derek what makes the whole world of ballroom most interesting isn’t just the dancing, but instead it’s the partnerships, sex and love triangles that go on inside of the vicious sport.

According to the March 18th print edition of GLOBE, Julianne has been away from the sport for years now, busy at first with music and now it looks like acting is her latest career of choice. She is the first to admit that the lifestyle that she once thought was so glamorous in the dance world is really pretty shocking by the standards of your everyday person. Since Dancing with the Stars helped to make the Hough’s a household name and it rakes in viewers and millions of votes each season, it’ll be interesting to see if a show about the real lifestyle will be as interesting to the general public. Perhaps middle America isn’t ready to see what really goes on behind the scenes. Maybe we need to believe that ballroom is a glitzy, cheery world filled with kindness.

Will you tune in to see the other, more realistic side? So far Derek and Julianne have no plans for a cameo on the show but might you be more tempted to tune in if they do pop up? Tell us your thoughts in the comments below!