Justin Bieber Met Anne Frank – Would She Have Been A Belieber – Was He Ignorant, Rude, Insulting or All Three? 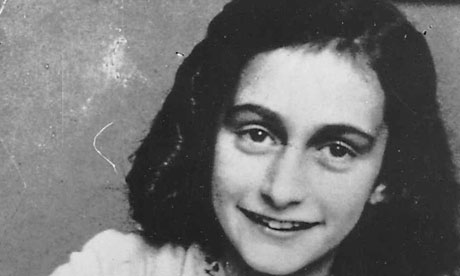 Justin Bieber’s Believe tour’s European leg is in full swing, bringing him to Amsterdam on Saturday. The brat and his new bangs made a visit to the Anne Frank House to take in some local history with global importance. If you don’t know who Anne Frank was and why she is so important then read this. The details of his visit are the most vomit inducing of his antics so far on his trip to Europe.

Justin went to the museum with some friends and body guards. The Facebook page for the Anne Frank House posted information about the douche’s visit. It reads “Yesterday night Justin Bieber visited the Anne Frank House, together with his friends and guards. Fans were waiting outside to see a glimpse of him. He stayed more than an hour in the museum. In our guestbook he wrote: ‘Truly inspiring to be able to come here. Anne was a great girl. Hopefully she would have been a belieber.’ Tonight Bieber will give a concert in Arnhem in the Netherlands.”

Justin is flattering himself thinking Anne would be a fan of his crappy music and his childish, unacceptable behavior. Her life story is an inspiration for the reader. There is a lot to be inspired by Justin’s story as he started his career, but what he’s turned into leaves a lot to be desired. If Anne Frank lived now and was a fan, like millions of teenaged girls worldwide, she would eventually dump him.

Reader’s of the museum’s Facebook post made comments ripping him a new one. The consensus is that he is self serving. Actually, that is the consensus of everyone he encountered in Europe so far on this tour. One comment posted on Facebook and again on CNN.com is “Glad he went, but, the last sentence is VERY self serving. He missed the lessons of Anne totally.” There has been no public comment from Justin’s camp regarding his Anne Frank comments. I also did not see the incident mentioned on Justin’s Facebook page or his official website. I guess his publicist needs more time to clean up his latest mess before saying anything.

Justin tried to deflect from his awful behavior when he publicly went after Lindsay Lohan. I don’t think he will be able to pull that stunt again. Like Lindsay, Justin doesn’t think he has a problem. Also like Lindsay, Justin has enablers and people who pity him. It’s not just friends and employees who bow down to the Biebs. For example, schools in Norway pushed back exams so Belibers could attend his show. Justin is still making a ton of money for everyone on his team so there is no reason to confront him.  Still, with all that money floating around couldn’t they at least rent the biebs a brain?