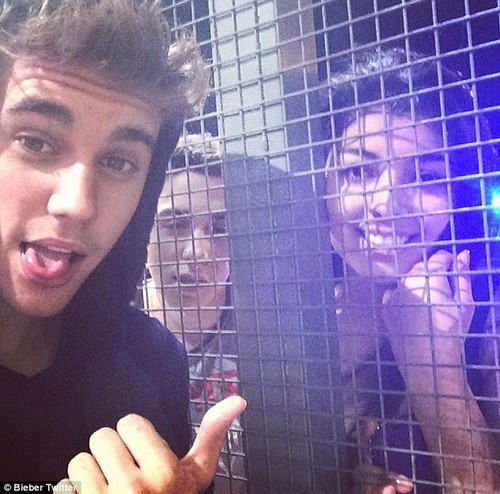 In his continuing case of breaking the law, Justin Bieber has decided to steal a security guard’s bicycle in a Vegas casino. On September 14th, Justin decided to steal a bicycle at the Palms Casino Resort in Vegas, but the footage was only just leaked now. Based on the video, Justin was chased by a couple of big security guards until he was eventually caught.

However, probably because he’s Justin Bieber and he’s famous, the security ended up letting him go after giving him a ‘stern talking-to’. See, this is why this kid thinks he can get away with anything – because he has in the past! The amount of trouble and sticky situations he’s gotten himself into, and he’s still not in jail, nor has he received any sort of significant punishment for any of his actions. Obviously, he’s never going to learn if people keep giving him special treatment, and chance after chance after chance. There’s only so many chances you can give a person before they truly screw up, and the way Justin’s going, he’s going to end up breaking a pretty serious law soon and then expecting to get away with it.

As far as his latest shenanigans go, this is actually not the worst. But what sense of entitlement must you have that you feel that you can steal a security’s bicycle and get away with it? And why would they let him get away with it? Sure, he’s technically still a teenager, but he’s at an age where he needs to start learning to take the responsibility for his own actions. Unfortunately, I don’t see that happening any time soon, especially if he never learns from his mistakes.

What do you guys think about the footage? Can we expect Scooter Braun to blame Lil’ Twist for this? Let us know your thoughts in the comments.