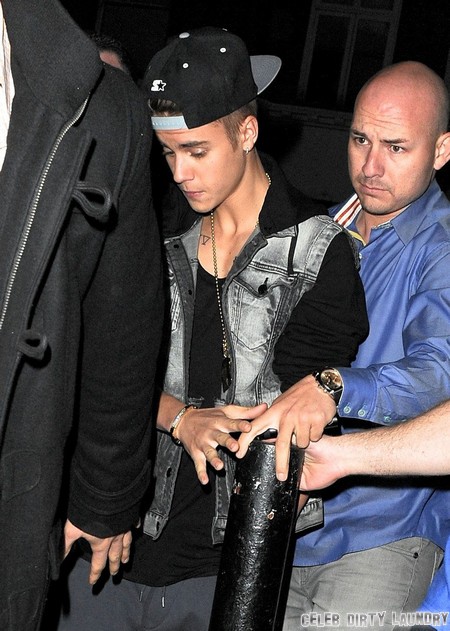 It looks like the supposedly heartbroken Justin Bieber has managed to pull himself together pretty quickly after Selena Gomez finally pulled the plug on their torturous relationship.  Just last week Biebs was spotted out with London model Ella-Paige Roberts Clarke on three different occasions. At the time she minimized the whole thing and claimed that they are just friends. Ella supposedly is tight with a few of Justin’s good pals and she runs with the whole crew. Not much of a surprise when Justin and Ella turned up in London club hopping through the wee hours of the morning on Feb. 27th.  They were first spotted at Project nightclub in the West End then moved to another club called DSKTRT around 2:30am.

Of course they are still only confirming that they are acquaintances, even after the two were spotted heading back to Justin’s hotel room at the Langtham at 3:45am!  Obviously Ella-Paige is a quick fix for the barely legal singer and according to sources that know her, she’s just fine with that. Ella wants to be famous and she knows that a few photographs of her looking great beside Justin will buy her at least 15 minutes of fame.

Do you think these two will actually turn into anything significant or is it just for fun? I mean Justin clearly couldn’t handle fidelity while with Selena so it’s hard to imagine him wanting it elsewhere. I suspect he wants to roll his blunts, screw random hot chicks and cash his checks. That’s it. He has a team plotting his next great career move but I have a hard time believing that Justin himself spends much time worrying about it at all. I think he shows up where he has to and once he’s off the clock he’s doing whatever he pleases.

Are Justin and Ella-Paige a good match? Is someone looking to use him a little more his speed? Tell us your thoughts in the comments below!

Justin Bieber leaves his hotel wearing a particularly colorful outfit that included two watches, purple leopard print trousers and a studded yellow baseball cap on February 26, 2013 in London, England. Bieber signed autographs for fans before heading to Birmingham where he will be performing tonight. Bieber reportedly took 17 year old model Ella-PAID Roberts Clarke back to his hotel in the early hours of this morning…