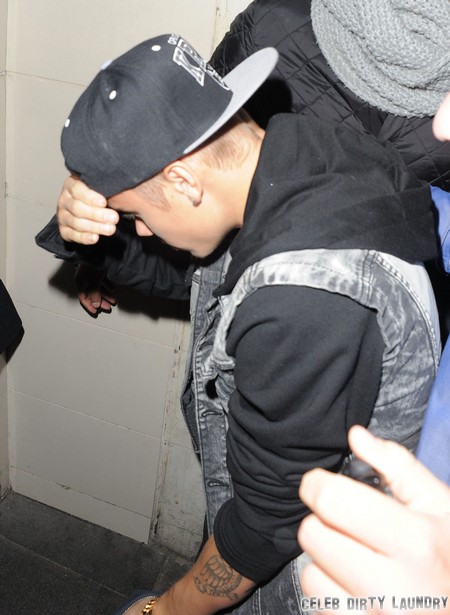 I think by now we can pretty much all agree that Justin Bieber is a total a**. In a few short years he has managed to transform himself from the hottest rising star around to an entitled punk that has no regard for laws or other people. Every time a new instance of bad behavior pops up Justin either excuses his actions completely or simply moves on to his next round of bad behavior – then his cynical management donate tickets to some worthy cause or drag the brat along to a charitable event.

Video just popped up from earlier this year of Justin and his crew leaving a NYC nightclub through the kitchen door. According to TMZ’s gem of a clip, Justin couldn’t be bothered to find himself a bathroom and instead whipped out his junk in front of everyone and pissed in a yellow mop bucket! Was he drunk at the time? Probably. But my guess is that even if he was stone cold sober he would have done the same.

He also sprayed a picture of Bill Clinton with cleaning fluid while saying “Fuck Bill Clinton” before leaving the place and the gross mop bucket behind. Betcha Justin had a laugh about this one, don’t you think?

The thing is it’s just another stop on his trail of doing whatever he pleases, when he pleases. This kid has had not a moment of accountability for any of his actions over the last few years which makes it even more hilarious to think that his mother just wrapped a media tour to promote her new advice book for teens. She’s the last person to be giving advice to kids with her own son so out of control.

What will it take for Justin to finally find himself in trouble? What do you think he will do that will finally catch up with him and will be a situation that he can’t weasel out of? Are you disgusted by Biebs behavior? Tell us your thoughts in the comments below!